Is This the Dream?

Boulder County in Colorado has a population of roughly 320,000, with perhaps the fastest-growing Jewish community per capita on the continent. During a period of little more than 10 years, the Jewish population has gone from 19,000 to 35,000, which includes growing numbers of professionals and young families interested in a change in lifestyle that involves the outdoors, care for the environment, and is, perhaps, less driven by work and more by a desire to place work into a broader context.

Boulder is home to one of the newest JCCs in our movement. It began as a pre-school with just five children when the influx had already begun, but well before it accelerated to its current pace. Over time, other educational programs were added, and a small 5,000 square-foot facility was acquired to house them. As the years passed, more young families arrived, and soon the small facility was hopelessly inadequate, so naturally, people started talking about something more. The question, though, was what.

The population of Boulder describes itself as “progressive,” which I interpret to mean, at least in part, that people there are on the leading edge of trends that often subsequently affect growing numbers of communities in other parts of the continent. This description is clearly evident among the members of the growing Jewish community. Although many of the typical institutions and organizations found in most Jewish communities are here, too, they have long been relatively small and have scuffled in efforts to draw larger numbers. The recent Pew study highlighted the growing number of American Jews who identify as “just Jews,” with no particular affiliation. That growth is mirrored in the results of the most recent Jewish population study undertaken here in Boulder, where the number of “just Jews” is substantially higher than the national average.

Perhaps, therefore, it comes as a surprise that Boulder is home to one of the most successful, dynamic, and innovative JCCs I have had the good fortune to visit. I arrived here yesterday to participate in the J’s fifth anniversary celebration—an outdoor event marking the first time most members of the community had come together in person since the start of the pandemic. On a picture-perfect afternoon, which preceded a dramatic sunset over the Rocky Mountains, just miles to the west of the JCC, hundreds of community members—mostly young families—came out to play, to dance, to eat, and to celebrate the centerpiece of their Jewish lives. 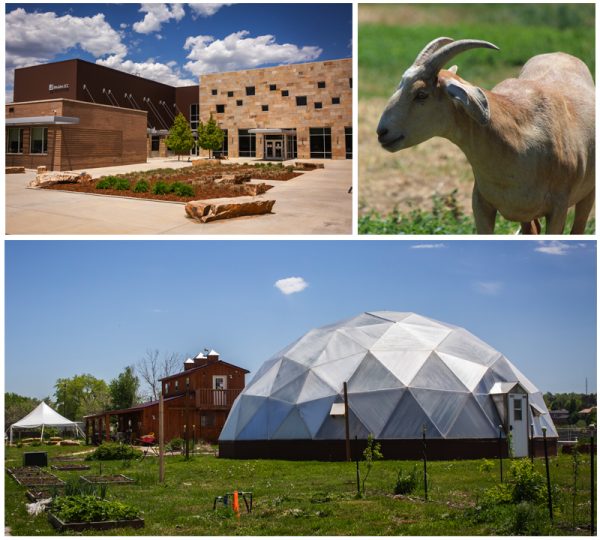 In some respects, this JCC looks like any number of others, but it is also markedly different. There is no fitness center here, but the early childhood education program includes a Forest School at which pre-schoolers spend 80% of their time outdoors – all year round. The waiting list for both the Forest School and the primary program is twice as long as its roster. There is no “membership” at the Boulder JCC, but the community comes out in droves to volunteer at its picturesque farm, where crops are grown exclusively to support those in the community who face food insecurity. I enjoyed apples picked and a perfect cherry tomato plucked from a hothouse plant. The farm has sections devoted to major Jewish holidays and grows flowers, plants, and spices mentioned in the Bible and integral to Jewish tradition—all enjoyed by the wider community. There are honeybees (Rosh Hashanah, of course) and newly planted grape vines. Chickens and goats provide eggs and milk.

The early childhood center is filled to capacity, with a shortage of teachers limiting its continued growth. The JCC is the only Jewish pre-school option in the community, and the rapidly growing number of families want more. Of course, the JCC has a day camp, a cultural arts program, myriad volunteer opportunities, and a dedicated professional team, led by the remarkable Jonathan Lev, who came to Boulder years before the J’s architectural plans were finalized, and has quite literally brought the community’s dream and vision to life.

Several other things struck me during my visit: The Jewish community offers among the most compelling program spaces in Boulder to the wider community—and many local organizations bring programs, events, and meetings to the J. As the most significant Jewish player in town, the JCC has committed itself to working in close partnership with the area’s three synagogues, Jewish Family Services, Chabad, and with other local entities in pursuit of something better for everyone. The goal here seems to be greater Jewish community for all—and the JCC is the engine, the driving force that is transforming what until recently seemed unimaginable into the extraordinary.

How did it happen? People were moving here to get away. They weren’t interested in traditional Jewish community and its expectations and demands, but a few inspired and dynamic newcomers felt something was missing. They believed Jews coming to Boulder might be looking for ways to come together, so they turned the soil and planted the seeds. They tilled the earth and cultivated interest, financial support, and collaborations. In time, they devised a plan to build a center for the community that looks, feels, and operates in ways that draw more and more people to it with each passing year. It’s quite a harvest. This JCC wasn’t a given or an established fact to be harnessed by current stewards of a longstanding community. It was an idea. A dream. And it is coming true.

But the Boulder Jewish community hasn’t yet arrived at anything akin to a steady state. It is growing— rapidly. Who knows? Perhaps some of the newest arrivals were drawn here by the reputation of the Jewish community and its remarkable JCC. I asked Becca Gan Levy, the J’s farm and sustainability director, whether what I was seeing was the realization of the dream or merely one step along the way to its ultimate fulfillment. Her wry smile said it all.

May the Jewish community of Boulder, Colorado, continue to go from strength to strength. And so may we all.