The San Francisco Bay area is home to six Jewish Community Centers (Addison-Penzak JCC, Los Gatos; JCC of East Bay, Berkeley; JCC of San Francisco, San Francisco; Osher Marin JCC, San Rafael; Oshman Family JCC, Palo Alto; and Peninsula JCC, Foster City). Depending on traffic, it can take as many as three hours to drive from the northernmost in San Rafael to the southernmost in Los Gatos and as in other parts of North America, the communities served by each of these remarkable JCCs are very different from the others and possess a unique sense of self and pride in what sets them apart from each other. 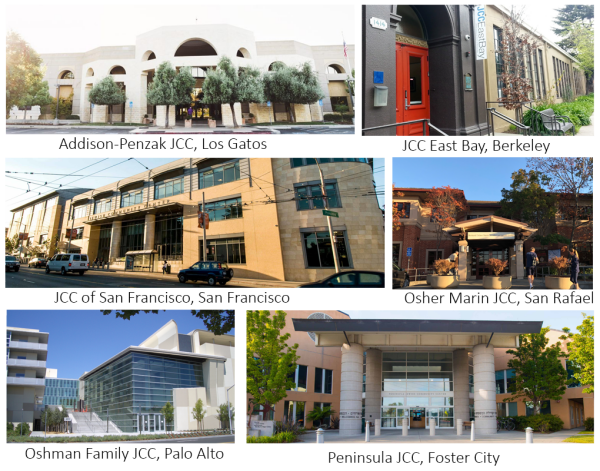 As a group, they are further distinguished by their commitment to one another. The six senior executives have been meeting regularly for years, creating a safe, supportive, and meaningful peer group in which they can—individually and collectively—share insights, confer about challenges, and explore ways to enhance their impact. Since the pandemic began, they meet more frequently, as do their cohorts of chief operating officers, early childhood directors, and other professionals—a Bay Area community of JCCs.

For Jennifer Mamlet (JCC Association’s Chief Development Officer) and me, visits with each of the six JCCs this week have been eye-opening, as we explored campuses and facilities, discussed current and emerging challenges and opportunities, and took part in conversations with lay and professional leaders about the future. Each JCC has played an outsized role in helping its community navigate the challenges born of the pandemic. Each has strengthened ties and partnerships with peer institutions in their local markets—congregations, day schools, Jewish social service agencies. Each has taken steps to resume more and more programs and activities in-person, while maintaining a vigilant commitment to the guidelines that have enabled it to operate safely and responsibly throughout this period. And each, while having benefited a great deal from crisis related funding, both from government and philanthropic sources, is conscious of the uncertainty that lies ahead.

As with nearly every JCC community, each Bay Area JCC enjoys important relationships with local funders and foundations. There are several funders here in particular that have made a point of supporting all six, taking special interest and pride in the unique effect JCCs are having across the region. The leaders of two of these foundations came to understand that a point would be reached at which government funding would no longer be available and many of those who responded so generously in the early months of the crisis would move onto other interests and priorities. They also foresaw that JCCs would continue to face financial and business-related challenges that would inhibit their continuing recoveries.

These leaders decided to do something about it—and the Power in Partnership Fund was born.

They assembled a group of major funders to create a pool of resources that will be distributed across the six Bay Area JCCs over the next few months. This funding will soften the effect of revenue lost during the crisis and fortify the JCCs’ ability to deliver programs and provide leadership at a time of particular significance. To date, nine foundations have joined the effort, which has already exceeded 70% of its $10 million goal—a goal the foundations are determined to meet by December 31, 2021, so they can distribute funds early in 2022.

Much about this effort is worthy of note:

Earlier this week, Jen and I took part in a meeting of the leaders of most of these foundations, the culmination of months of conversation and consultation with the lead foundations. They were eager to learn more about what was happening across the field, about our view of their efforts and of the potential of Power in Partnership to make a difference. Their enthusiasm for the work of our movement and its unique importance was palpable—as is their determination to reach their funding goal—a determination exemplified by the readiness of each foundation to call upon others to join them.

Power in Partnership is about collaboration among major funders. It is about aligning opportunity and recognizing these JCCs as an invaluable resource to the Jewish communities they serve. It is about a growing appreciation for their potential to do and be more and about the possibilities that emerge when significant funders and great institutions come together with a shared commitment to a greater purpose. It is a model worthy of note. A model to be celebrated. A model worthy of replication in every corner of our movement. There is indeed power in partnership. Power we can unleash when we work together.