To Everything There is a Season

Spring is a time of renewal. Longer, warmer days. Blooming trees and gardens. It is a season of beginnings—of new life. A season of weddings and graduations, major milestones in the lives of individuals and families. A season in which we come together, in settings both large and small, to mark these occasions; to celebrate; and to reflect on what came before. Against the backdrop of a fading but still stubborn pandemic, these moments this year seem particularly special.

For the JCC Movement, this spring brought other transitions that I have found myself contemplating of late. I had the great privilege to participate in celebrations for three extraordinary JCC executives as they approach the conclusions of long and remarkable careers in service to the Jewish people.

David Sorkin retired as CEO of the Joan and Alan Bernikow JCC of Staten Island, the final chapter in a 45-year career that included stops in Detroit, New Orleans, and Pittsburgh, among others. His tenure in Staten Island was highlighted by the opening of its flagship,120,000-square-foot facility and the development of strategic alliances with government, nonprofit, and business partners that fostered growing ties with the wider community.

Cleveland saluted Michael Hyman following 18 years at the helm of the Mandel JCC and a career that spanned 47 years of service to the Jewish community. Michael has been a builder, having overseen major expansion of the JCCs in Cleveland and, previously, in Buffalo. A former camp director, his passion for Jewish experiential education for children of all ages has resulted in a generation of committed Jews and no small number of Jewish leaders in both communities who look to Michael as both role model and inspiration.

Under a magnificent tent on the grounds of the Leventhal-Sidman JCC in Newton, Massachusetts, the JCC of Greater Boston celebrated the 33-year-long JCC career of Rabbi Mark Sokoll. Hundreds of friends, colleagues, partners, and community members came out to salute this pied piper of Jewish life, who, by pioneering initiatives in Jewish family engagement throughout greater Boston, brought thousands of families with young children into the network of programs and institutions that make up the greater Boston Jewish community.

They came to be part of Jewish life—under every conceivable auspice—underscoring the simple but inescapable notion that greater Jewish community is achieved only when successes of a single institution or organization can be measured by success of the others.

I found myself reflecting on the Jewish wish shared when someone celebrates a birthday: Ad meah v’esrim| מאה ועשרים  עד | [May you live] until 120. This wish for long life and great achievements comes from Parshat Vayeilech in which Moses announces to the Israelites, on the cusp of their arrival in the Promised Land following 40 years of wandering in the desert, that he has reached 120 years of age and is approaching the end of his life. Drawing from this text, it has become tradition to wish others a life as long and storied as that of Moses. 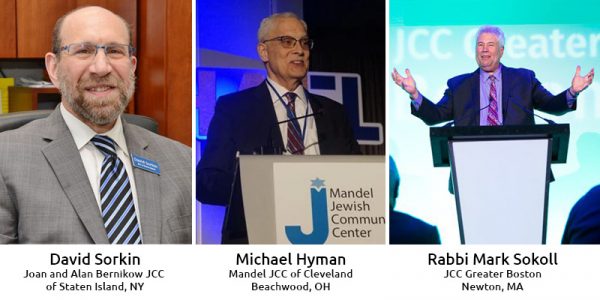 The math isn’t precise, but in David, Michael, and Mark we see the fulfillment of this hope. Among them they have amassed more than 120 years of exemplary leadership dedicated to innovation and Jewish community building. For the untold number of staff, lay leaders, and community members whose lives these CEOs have touched, the hope for a career and a lifetime of achievement, great deeds, and inspiration has been fulfilled.

This past week marked another such transition as Gary Jacobs’ four-year term as chair of the board of JCC Association of North America ended and that of David Wax began. Gary and David both hail from San Diego and both formerly chaired the board of the Lawrence Family JCC on the Jacobs Family Campus. During Gary’s four-year tenure at the helm of JCC Association, marked by a global pandemic and societal strife, including a disturbing spike in violent antisemitism, the JCCs of North America came to increasing prominence. In many communities, JCCs served as the central vehicle for responding to local crises, doing so by way of a growing commitment to partnership and collaboration with a host of Jewish communal allies. Throughout, he provided a steady hand and a guiding light and turns the reins over to David amidst emerging continental initiatives around innovation, talent development, family engagement, and the long-awaited resumption of the JCC Maccabi Games®. From strength to strength indeed. 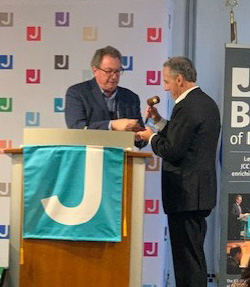 Chapter 3 in the Book of Kohelet (Ecclesiastes) includes the well-known passage Pete Seeger helped to immortalize in American pop culture when, in 1959, he composed the melody for “Turn! Turn! Turn!” that The Byrds released in 1965. The last line of the chapter (Ecclesiastes 3:22) captures better than any other the moment in which we find ourselves now in this season of transition:

Excruciatingly, this period of transition has been marred, yet again, by a once unimaginable tragedy: the horrific elementary school massacre in Uvalde, Texas. Like Sandy Hook, Parkland, and far, far too many others, Uvalde, a name we didn’t know until this week, is now another we shall never forget. May it be God’s will that we find the strength to heal the wounds of a society in so much turmoil that its citizens, again and again, commit heinous and callous acts of hatred.