Was It Not for Just This Moment That You Became a Queen?

The visit began with a tour. That’s par for the course. I was greeted on arrival by Eric Koehler, the remarkable CEO of the Arthur M. Glick JCC in Indianapolis, on a warm and beautiful winter morning this past Tuesday. Founded in 1915 and roughly 65 years at its current location, the JCC sits in a part of Indianapolis that is home to nearly 45% of the local Jewish community, according to the most recent population study. Among its distinguishing features are a brand-new fitness center and an expansive aquatics facility that includes a therapeutic pool with a floor that rises and falls, so users can enter and exit without going up or down steps or ramps.

Great pride of place is reflected in the impeccable cleanliness of the facilities and the lively spirit that pervades the building and the campus, which was accentuated by anticipation for the celebration of Purim. Eric insisted on taking me to my first-ever group exercise class, where we joined the “Silver Sneakers” for some intensive calisthenics and weight training under the watchful eye of a master instructor. I’m pretty sure I would have won the reps competition with the two-and-a-half pound weights had it not been for a late surge by an 80-something woman who I only later learned had been a competitive swimmer in high school…. 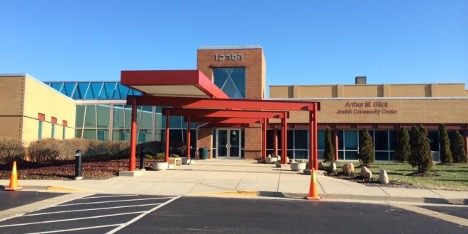 I suppose in some ways this was a fairly typical JCC visit, to a fairly typical JCC community. The early childhood education program is packed, and there is a long waiting list—but it’s also smaller than it used to be because there are too few teachers, a problem heightened by a citywide unemployment rate of less than 1.5%. Notwithstanding the effects of the pandemic, the JCC enjoys an increasingly healthy business and a strong balance sheet—points of pride for the staff and the board, the latter headed with both passion and dedication by Steve Harms.

The Indianapolis Jewish community, which has grown in recent years, also reflects some fairly typical dynamics. Among them an altogether too limited commitment to partnership and collaboration between and among Jewish institutions and organizations that have grown up here over more than a century. Recent years have seen the arrival of a number of new executives. Eric came to Indianapolis from Stamford, Connecticut, in 2017. Evan Lubline, CEO of Hooverwood, the Jewish community’s senior living center, arrived from Cleveland not long thereafter, and the Jewish Federation welcomed its new CEO, Mark Swatez, who moved to Indianapolis from Chicago earlier this year.

Changes in executive leadership are also nothing out of the ordinary in Jewish communal life, but I found myself wondering whether these particular changes had something to do with the most unusual part of my visit. On Wednesday morning I was the featured speaker at a gathering of Jewish communal leaders—lay and professional—from half a dozen of the most significant institutions and organizations in town. The meeting was hosted by the JCC and the Jewish Federation—which were represented by both board members and key staff. Also in attendance were leaders from the Hasten Hebrew Academy, the Jewish Community Relations Council, Jewish Family Service, Hooverwood, and Rabbi Justin Kerber from Congregation Beth Shalom (the only congregational rabbi to respond to the invitation).

The discussion was lively. It followed remarks about the JCC Movement and our experiences over the last two years as we confronted community-wide vulnerability on a scale too large for any single Jewish organization or institution to address on its own. It focused on questions pertaining to the future of Jewish life in Indianapolis, matters of common interest and collective benefit. There were threads of conversation from other communities about the illusions of Jewish organizational life—”My donors.” “My families.” “My board members.” “My staff.” I know of precious few such people who believe that they belong to anyone. They go—and remain—where they get satisfaction, where they are enriched. And the moment they don’t or they’re not, they go someplace else. The only entity to which they truly belong is the community itself, hence the critical importance of our reorienting ourselves to find ways to work together to make it stronger—a process whose results will redound to the benefit of all.

The formal meeting ended, but the lively conversation continued—over coffee and breakfast. Several in attendance suggested more gatherings like this one—to discuss shared efforts and new partnerships—and made a commitment to ensure more local leaders would take part the next time.

Like so many others, this community enjoys substantial infrastructure, strong leadership, and a powerful philanthropic tradition—and this community is growing. Still, in many ways it is scuffling in the face of such enviable circumstances. The pandemic has revealed something of the potential of working together. New leaders appear to have ushered in a moment of possibility and openness. What a privilege it was for me to play a small part in catalyzing this discussion. A privilege for which I am deeply grateful to both Eric and Mark.

On the trip home I found myself reading about Purim and the celebration that would soon begin. The heroism of Esther, who overcame fear for her own life when she revealed herself to be Jewish to her husband, the king, who had just issued an edict calling for the annihilation of the Jews. Her choice didn’t come easily. It was in no small part inspired by the urging of her uncle, Mordecai, among whose words of wisdom to her were these: ומי יודע אם לעת כזו הגעת למלכות | U’mi yodeia im l’et kazot, higa’at lamalchut? | But who knows, was it not for just this moment that you became a queen?

Each of us is compelled to reflect upon the responsibilities with which we are charged. At a time of both new and continuing crises, of great challenges and equally great opportunities, a time of war, of division, and of pandemic, perhaps what is appropriate is for us to ask of ourselves: Is it possible that it was for precisely such times that we became leaders?