I arrived in Israel a week ago, feeling strangely like I had been away for a long time, though my last visit was in May. Perhaps that’s what comes of having a son here, a son serving in the Israel Defense Forces (IDF). 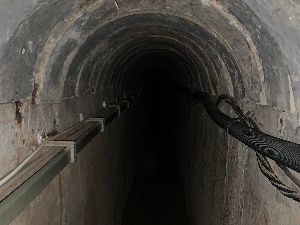 Friends and colleagues, leaders and partners filled the first days of this visit. Delegations from the JCCs of York, Pennsylvania, Salt Lake City, Utah, Louisville, Kentucky, and Charlotte, North Carolina, are also here and I was honored to have shared a few moments with each as they embarked on their own journeys of discovery, most of them visiting Israel for the very first time. There is magic in the first visit. And a little bit of that magic rubs off on veteran visitors who find themselves in the company of first-timers. I envy them the memories they will make together this week. But then again, as is so often the case, my own experience has turned out to be the stuff of memories; in particular, memories of my time with three soldiers.

Asher is 22, the child of olim (immigrants) from Los Angeles, who arrived in Israel not long before he was born. He is part of an elite unit charged with finding and destroying terror tunnels, both on the Gaza and Lebanon borders. Ten soldiers, five each from the combat engineers and hi-tech divisions, tasked with exposing and eliminating every tunnel on two borders, and they are doing so with remarkable success.

He gave us a fairly detailed briefing on the current defensive posture along the Gaza border, a border riven by violent Hamas directed protests and attacks every Friday. Daily they contend with the appearance of balloons and kites bearing incendiary devices or booby-trapped children’s’ toys, rigged to explode when touched by an unsuspecting child on a nearby kibbutz or playground. The IDF’s defensive strategy is increasingly sophisticated and includes the construction of yet another protective wall, this one being built entirely underground to a depth of 70 meters, along the length of its 47-kilometer Gaza border.

Avichai is a reserve officer in an elite combat infantry unit. He served in Lebanon during the Second Lebanon War, where nearly every member of his unit was wounded, and in major operations in Gaza in 2008, 2012, and 2014. In the face of mounting criticism of the IDF by those who seek to undermine its credibility through the Boycott, Divestment, Sanctions (BDS) effort, he has decided to act. Begun by enemies of Israel, BDS is embraced by altogether too many who confuse the circumstances of the tragic reality of life among Palestinian civilians with those of a host of other beleaguered populations or groups, whose circumstances bear no relation to those unfolding here. It has provided fodder to Israel’s enemies whose ad hominem attacks on Israeli soldiers belie the realities of the world’s most ethical army.

האמת שלי | My Truth was established in 2014 following Operation Protective Edge. It is comprised of combat veterans of every political and religious background and is devoted to providing first-hand testimony about their experiences in combat, and the conduct of enemy combatants from Hamas and Hezbollah. Human shields, suicide bombers, rigged explosives hidden in ambulances, schools, and hospitals. These are the tactics faced by the young men and women charged with Israel’s defense, who make critical life-or-death decisions in a virtual instant. Make the right decision, and you’re a hero. Make the wrong one, and you are subject to criminal prosecution and international vitriol.

Avichai, and the young people who have responded to his call just want to set the record straight. They have traveled to European capitals to give testimony. They provide important insights to the embassy and consular personnel. They meet with religious, communal, and civic leaders. All without a political agenda, but rather with the hope that judgment will be informed by more than just the strident protestations of Israel’s critics.

The third soldier is my son, Aaron. Yesterday, together with his mother and younger brother, and in the company of family and friends, I attended his Tekes Kumta (Beret Ceremony) marking the completion of eight months of basic training as a paratrooper. Survival skills. Light and heavy weapons. Urban warfare. Jump school. Combat medic training. Reconnaissance. These are the tools and skills that will be needed by this newest combat brigade to have earned their red berets. 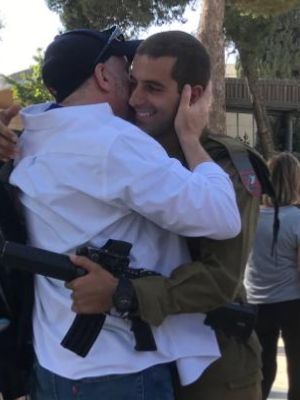 We were consumed by emotion. I found myself reflecting upon the path that had brought us to this day. My grandparents’ escape from the cauldron of European Anti-Semitism. My father’s service in Israel’s War of Independence and the devotion to Zionism and the Jewish people instilled in me and my siblings by our parents. Though I lost my dad in January, he was with me yesterday, beaming with pride in his grandson. How many links in the chain of my family and of our people had led us to this moment? Even as I write about it, I have goosebumps.

After a little break to recover from the grueling final weeks of basic training, Aaron will return to his unit and begin his service as an active-duty soldier charged with the defense of his country and of his people. He’ll hold the lives of the young men with whom he trained in his hands, and they will hold his in theirs. He’ll be expected to make life and death choices and decisions in an instant. He’s a fine boy and I’m sure he’s an outstanding soldier. He’s my son.

I looked out at the hundreds of young men who took part in the ceremony. I looked at the faces of these mostly 18 and 19-year-old boys of every conceivable religious, ethnic, and political background. Jews and Arabs, secular and religious, native-born and new immigrants. They are all my sons. They are all our sons.

Over the course of a long and emotional day, time and again I found myself reflecting once more on the words of the Blessing of the Cohanim:

May the Lord bless you and keep you;
may He make His face shine upon you and be gracious to you;
May He lift up His countenance upon you and give you peace.