I remember being dazzled by magicians as a child. The good ones made things disappear and reappear right into and out of thin air. In real life, though, once something’s gone, it’s nearly impossible to bring it back. Nearly.

Helena Czernak and Aleksander Prugar are two among countless Jews who have longed to recover some of what was lost in the Shoah—the Holocaust. How does one capture the essence of something when it’s no longer there? They’re not magicians, but on Wednesday evening, I saw them achieve something that put those pretenders to shame.

Helena and Aleks are artists living in Poland, the graveyard of Europe’s largest Jewish community, which, on the eve of World War II, numbered more than three million; today, fewer than 20,000. The Jews of Poland were erased in the Holocaust, their homes and possessions stolen, their lives and stories just about completely obliterated. When others moved into their former homes, any sign or evidence of the prior Jewish occupants was quickly removed—including the mezuzot on the front doorposts. They literally were gouged out, leaving little more than an indentation—a hole where once these small cases had been affixed—cases that contained the Sh’ma, Judaism’s most sacred prayer. 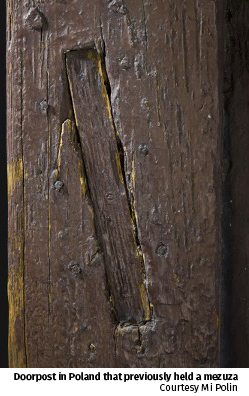 Several years ago, Helena and Aleks began visiting these former Jewish homes and, employing their remarkable artistic talents, created molds of the precise imprints left behind on these surviving doorposts. They then cast the molds in bronze and remake them as mezuzot. These objects are not the essence of what was lost but in large measure, the mezuzot themselves, which now can be affixed to doorposts of Jewish homes once more.

Helena and Aleks’ extraordinary work was featured this past Wednesday evening as part of JCC Association’s Days of Memory series, marking the Yamim (Days), three of the most important days on the calendar of the State of Israel and the Jewish people: Yom HaShoah, the memorial day for the victims of the Holocaust. Yom HaZikaron, the memorial day for Israel’s fallen soldiers and victims of terror. And Yom HaAtzmaut, Israel’s independence day. All three occur in the space of about a week each spring, a powerful juxtaposition of loss and renewal, coming right on the heels of our celebration of Pesach.

On Pesach, we recount the story of the Exodus from Egypt and the deliverance of the Jewish people from bondage. With virtually nothing in the way of objects or artifacts to touch or to hold, it is the story itself that enables us to remember. It is in the telling that we are reminded to relate the story as if we, ourselves, had been liberated from slavery by the outstretched arm of the Almighty.

Notwithstanding the devastating destruction wrought by the Nazis and their allies against the Jews of Europe, remnants and keepsakes, diaries and archives, poems and prayerbooks endure, allowing us to glimpse and touch a portion of the world that was lost. A small portion. Altogether too small. For far too many, nothing remains and each time we make a new discovery, another light, thought to have been extinguished forever, is rekindled. That’s the magic of Helena and Aleks.

In a few days, we’ll mark two more days of memory. On the eve of Israel’s 73rd birthday, families and friends will gather across the country and around the world for Yom HaZikaron—to remember those who paid the ultimate price for our freedom and independence as a Jewish people. We’ll tell stories, look at photographs and home movies, share keepsakes, and visit graves as we remember—and by remembering, give new life to those we have lost.

And then, when the sun sets late Wednesday afternoon, we’ll commence the celebration of all that has been gained from the miraculous, sovereign, independent State of Israel, where powerful, new memories are made each and every day.

Memory is the dividing line between what is lost and forgotten and what lives on. My teacher and mentor, Mel Reisfield, z”l, always reminded his students that we Jews are endowed with a sense of history. Each of us is a link in a chain going back more than 4,000 years—every link connected to those who came before us. When we remember and share our memories, we create bonds with the links who will follow, breathing new life into history.

Please join us as we breathe life into history again this coming week on Virtual J, through our series “Days of Memory: From Commemoration to Celebration. Yom HaZikaron: The Power of Jewish Peoplehood Through Personal and Collective Mourning will air on Tuesday, April 13, at 8 p.m. (EDT), and the series will conclude with Yom HaAtzmaut: Moments of Pride Through Israeli Innovation on Wednesday, April 14, at 8.p.m. (EDT).

P.S. The Jewish people made history again this year when new and emerging Jewish communities across the Persian Gulf joined with Jewish men and women serving with the United States armed forces in the region to celebrate Pesach together for the very first time. This article describes the group’s seder and appeared earlier this week in “The Times of Israel.”
Subscribe to A Message from Our President and CEO