For six months we have been making our way through the lengthening pandemic as the days, at times, seem to pass at a snail’s pace. But something changed when the calendar turned to September, bringing with it the imminent approach of Rosh Hashanah. As always, we eagerly anticipate the holiday’s arrival, and for several weeks already, nearly every interaction with friends, colleagues, and family has included inquiries about plans for the chagim (the High Holidays, חגים) and warm wishes for the year to come. Shanah Tovah u’Metukah (שָׁנָה טוֹבָה וּמְתוּקָה). A heartfelt wish for a good and sweet year.

Without fail, we begin to anticipate what the year ahead will bring. I have been thinking a lot of late, too, about what I was imagining last year at this time—right ahead of the new year. There were hopes and dreams. Plans and ambitions. 5780 would include the celebration of my mother’s 90th birthday and the high school graduation of our youngest son, Elan. As a lone soldier in the IDF (one without immediate family in Israel), our middle son, Aaron, would be getting leave to return to the U.S. for a month, which would include a family vacation.

Exciting programs and bold new initiatives would fill the year on the professional front. JSummit and JCC Maccabi®. The launch of a powerful partnership with the Union for Reform Judaism. A dynamic new Israel engagement program accelerator. Strategic collaborations with mega-philanthropy that would bring millions of dollars of investment to strengthen the field. There were no shortages of hopes and expectations, nor of plans and possibilities on the eve of 5780. 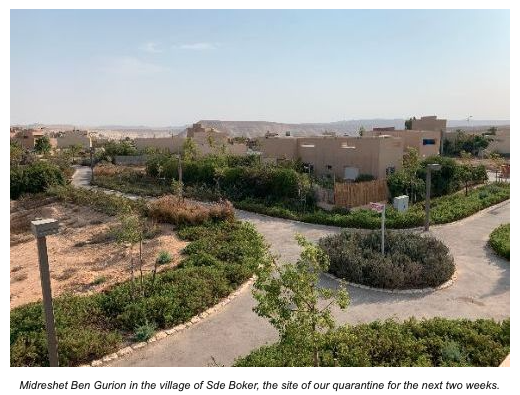 Social distancing? PPE (Personal Protective Equipment)? Month after month of working from home and night after night of resting my head in my own bed? In all these months, I hadn’t seen the inside of an airplane until last night, when my wife Janet and I boarded our flight to Israel, where we will celebrate the chagim (the High Holidays, חגים) with two of our three sons: the soldier and the newly minted high school graduate, who has just begun his gap year in Israel on the Young Judaea Year Course. That, I suppose, is a plan we actually might have imagined a year ago—though it certainly wouldn’t have included a two-week quarantine, a country in lockdown, or the ability for me to spend an entire month in Israel, with virtually no interruption to my regular work schedule.

But here we are.

5780 was full of surprises—right to the end. There was COVID-19 and yet another year of devastating natural disasters. But 5780 also brought its share of hope and wonder. The pandemic brought out fortitude and flexibility we didn’t know we had. Americans discovered newfound resolve to renew efforts to strengthen our society and our citizenry with a deeper, increasingly outspoken commitment to social justice, inclusion, and fair play.

In Israel, a year that began with a wary eye on nervous borders with Syria, Lebanon, and Gaza ended with the eyes of the entire world riveted to a ceremony on the White House lawn celebrating peace. Leaders from the United Arab Emirates (UAE) and Bahrain—the first two Arab countries to commit to full diplomatic relations with Israel in a quarter century—joined Prime Minister Netanyahu and the president of the United States in signing the Abraham Accords.

The final meeting in which I took part yesterday, ahead of our flight to Israel, was a gathering of the Conference of Presidents of Major American Jewish Organizations. Convened as a follow-up to the Abraham Accords, we welcomed Yosef Al Otaiba, the UAE Ambassador to the United States, and Lana Zaki Nusseibeh, Ambassador and Permanent Representative of the UAE to the United Nations, for an hour of discussion and reflection on our growing friendship and the enormous opportunities that lie ahead for Israel and the Arab world—opportunities that will be pursued hand-in-hand, in peace. Ambassador Nusseibeh began her remarks with these words: “Shanah Tovah.” Thinking back on those final hours of 5779, who amongst us could have imagined that?!

May 5781 be a year of good health and happiness for you and yours. May we—as a movement— know progress and prosperity. May COVID-19 be relegated to the dustbin of history. May our country find strength in the knowledge that what unites us is far more powerful than what divides us. May bold steps into a Middle East increasingly committed to peace between Arabs and Israelis bring about more signing ceremonies in places such as Washington, Abu Dhabi, and Jerusalem. And, until deep and lasting peace in the region is the promise of all who live here, may God protect my son and all those who have pledged their lives to the defense of the State of Israel and the Jewish people.