I witnessed something remarkable this week. JCC Association played host to the annual JWB Jewish Chaplains Council—Chaplain and Lay Leader Training Course. Over the course of four days, 54 rabbis, both active duty members of the military and lay leaders (non-military) who bear responsibility for the spiritual needs of the Jewish men and women with whom they serve, and who also bear responsibility, as chaplains, for the provision of spiritual support to service men and women of all faiths, took part in this year’s training. The theme was “How Should Jewish Chaplains and Lay Leaders Speak, Teach and Preach About Israel.”

Readers of this weekly message know well that Israel is a topic that is close to my heart. And there was a great deal about the discussions and deliberations around this year’s theme that is worthy of mention. But, though I was moved and impressed by both the program and the interactions around each segment, the most remarkable thing that I saw was not fundamentally connected with the theme.

Our chaplains and lay leaders don’t get to choose the members of their congregations. They don’t know much about the Jewish backgrounds of those for whom they bear responsibility until they become directly engaged with them. Owing to shifting deployments, they also have little basis to anticipate the length of time they will have with any individual soldier, sailor, airman or woman, Marine or Coast Guard. Their “congregation” is those to whom they are assigned to minister.

At the same time, each chaplain and lay leader comes to their assigned duties from a particular background, having been ordained at a seminary with a parochial view of Jewish tradition, scripture and worship. I don’t need to emphasize that the different seminaries: Reform, Reconstructionist, Conservative, Orthodox, Ultra-Orthodox, etc. need not necessarily view one another with great regard, though one would hope that they do so with respect. Congregants at the synagogues which belong to these denominational movements assume that they will experience a kind of spirituality reflective of their denominational choice.

As with so many other gatherings of Jewish leaders of diverse perspectives, it would be reasonable to expect that a gathering like this one would include its share of fireworks, outspoken differences of opinion, perspective and worldview; that there would be built-in biases and perhaps a grudging and reluctant willingness to abide the “others.” But that is not what I saw. 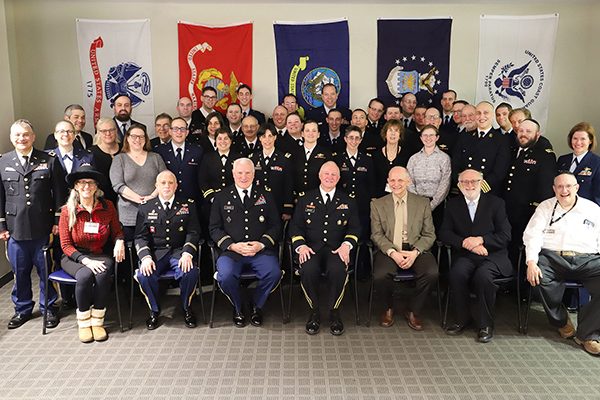 Military dress uniforms were worn on the final two days and the group was more visibly blended together, but prior to that it was “come as you are.” During the hours I was privileged to spend with them I saw Chabad rabbis with tzitzit and Reform rabbis in jeans and skirts. I saw big city seminarians and career military men. I saw beards of varying lengths and tidiness. I saw men and women both with and without kipot. But it wasn’t wardrobe or the indicators of denominational affiliation that truly stood out. It was the obvious and overt alliance that existed between and among them—together. Irrespective of training or upbringing, and notwithstanding any divergence of doctrine as spiritual leaders, this incredibly diverse group of Jewish religious leaders were clearly focused on one overriding and common thing.

They have the same congregation. And it is diverse. And disjointed. It is temporal and unique to its circumstance and location. It gathers either on the brink of or amidst crisis, conflict or war though it is marked by prolonged periods of—just waiting. It can be unlike any other congregation anywhere. And yet it is just like every other congregation everywhere.

For four days this week, we were privileged to host 54 rabbis, the products of a dozen seminaries representing not fewer than five denominational movements who came together to do better for their congregants. Because at this gathering, the shepherds joined hands in the greater interests of the flock. That’s just what we do in every JCC and independent overnight camp across our movement. It’s about “them.” It’s about “more.” It’s about “better.” It’s about the future of Jewish community and Jewish life on this continent.

Congratulations and thanks to Rabbi Irv Elson, retired U.S. Navy captain and director of JWB, Andi Meiseles, educational consultant and the architect of this year’s training, Janine Acevedo, program associate and the gathering’s jack-of-all-trades, and to everyone here at JCC Association who had a hand in this extraordinary gathering. Most of all, our thanks to the chaplains and lay leaders; proud, dedicated and devoted American Jewish patriots who honor us all with their unstinting service to the United States of America and to the Jewish people.