I spent last Sunday at Camp Young Judaea Sprout Lake. I was there to visit my son, Elan, a madrich (counselor) for a bunk of 12-year-old boys. Though it wasn’t visiting day, Helene, the camp director, had encouraged me to drive up. I hadn’t managed to get there last summer, the first time I could remember missing a summer at the camp at which I had served as director earlier in my career; the place I had met my wife, Janet; the place my boys had gone from the time each of them turned eight-years-old. In fact, at least one of the five of us has been at Sprout every summer since 1987. Just writing those words leaves me shaking my head. Thirty-three years? What is it about camp that connects us in such a profound way?

I’ve thought a lot about that over the years, firmly convinced that overnight camping is the most powerful, identity-forming experience we have in the world of Jewish education. Camp is voluntary—we choose to go. It’s repeating, with most kids beginning to count the days until the next summer as soon as they come home from the last. It’s immersive. From the moment you arrive, you’re literally in another world. It’s out in the country. It has its own sounds. Its own traditions. Its own songs. Everyone has responsibility—for cleaning the bunk, for serving the meals, for sharing the load. The most important people to the experience of campers are counselors and staff only a few years older than they—often former campers themselves—role models and mentors. Jewish tradition. Israel and Israelis. Chevra חברה—more than friendship or esprit-de-corps, your friends in camp are your crew, companions on a journey that often lasts a lifetime. Camp is the place where our Jewish journey kicks into gear and gets into our bones.  Voluntary. Repeating. Immersive. Intensive. Empowering. It is a huge part of how we become the people we will be.

Every summer experience builds upon the ones that came before. The whole unit anticipating the rafting trip they take next year. The talent show. Inter-camp color wars. The summer they finally get to go up the climbing tower.  Many of our camps have integrated a summer in Israel.  And for each one that does, discovering Israel becomes part of that same shared adventure and forever after Israel is a part of the stories, of the lives and journeys that they took, together.  This summer?  Emma Kaufman.  Pinemere.  Livingston.  Wise.  Nearly 250 kids in all. 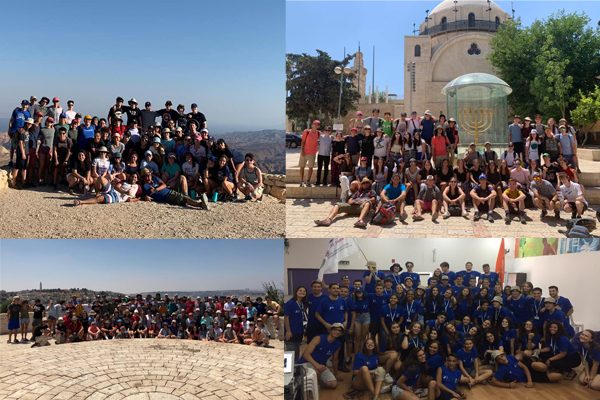 At 25 overnight camps across the JCC Movement from coast to coast, more than 22,000 campers and 6,000 staff are sharing in experiences that will stay with them for a lifetime, with friends—old and new— who will be their companions along the way. And take note, it is these same campers and staff who will fill out the leadership ranks of the Jewish community and the Jewish world in the decades ahead. Know how I know? Just take a peak in the mirror.

In the continuum of our summer experience, tens of thousands of other kids are taking part in day camp programs at nearly every JCC. Many, not yet ready for sleep-away camp, are getting a taste of what’s to come, their counselors and staff having frequently learned the tools of the trade during their own overnight camp experiences. Across the movement, more than 58,000 campers and 11,000 staff, each day creating rich and meaningful experiences to take home—where they become part of the family’s experience that day, that week, that summer. Day camping is about engagement. Engagement with families. We see them in the mornings at drop-off. We see them in the afternoons at pick-up. And they see us too, but not just in the ways we think of first. They see us through the campers’ eyes, through the stories, the songs, and the projects that their kids bring home. And those touches open the doors to broader and more expansive family connections.

Camp infuses our lives with ideas and traditions. It empowers us and makes us more independent. It surrounds us with friendship and love. I went up to Camp Young Judaea Sprout Lake last Sunday to see my son. I went there to spend time with Helene, one of the great camp directors I have had the honor to know. I went there to walk around; every hill and path a memory of my own time there so many years before. I went home.