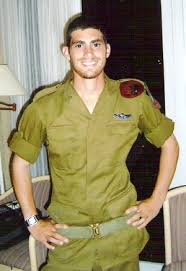 In February 1984, during the cold and windy winter of Holland, Pennsylvania, a legend was born. In August 2006, the man who became this legend was killed.

Michael Levin, the grandson of Holocaust survivors, made a life-changing decision when he was only 18 years old—to move to Israel as part of his Jewish journey. And so he did, not long before he joined the Israeli army as a lone soldier, one who elects to serve Israel with no immediate family support nearby.
During the steamy summer of 2006, Michael was given leave to visit his family in the United States. Two weeks into his trip, war broke out on Israel’s northern border. Michael immediately cut short his vacation and flew back to Israel to serve with his unit. On the first day of August, they moved forward and began an intense firefight with Hezbollah forces.

Michael died that day fighting for the country he loved. Though his life ended, his legend endures. From across the Jewish world, hundreds of thousands of teens have paid respect to Michael by visiting his grave at Mount Herzl, Jerusalem.

Michael’s funeral was one to remember. Thousands of Israelis, who had never heard of him, attended. They were taken by Michael’s vision, that the Jewish land, our homeland, belongs to us all—is loved by us all—and therefore should be protected in spirit or through action, by us all. Random Israelis came together. Bonded by Michael’s sacrifice, they felt a personal obligation to pay their last respects—and to send Michael onto his next journey with enormous gratitude.

Thirteen years later, Michael’s grave has turned into a pilgrimage site, drawing visitors from all over the world, including participants in JCC Maccabi Israel® (JMI), the teen travel program for JCC and overnight camps of JCC Association Center for Israel Engagement.

Every summer, teens from our JMI program stand by Michael’s grave and consider the enormity of his dream. They celebrate his Jewish identity, one in which Israel is worth dying for, as so many have. And certainly, they see firsthand that it is one worth living for.

Learning about Michael Levin, through the film, “A Hero in Heaven,” is one of the components of our JMI program—a pluralistic Israel experience that exposes teens to all that is great about Israel—its culture, its history, and its people. These trips help teens better understand our collective Jewish past so they can help build a shared future. All trips are created to build meaningful dialogue between Israeli and American teens, to challenge each participant to become a better and stronger leader, and to understand the role of community in Jewish life. This summer, six JMI trips, with more than 250 participants from JCCs and overnight camps, experienced Israel through the country’s “70 faces.”*

Summertime in Israel, full of tourists, allows Israelis the rare opportunity to see the country through the eyes of others—people of all ages and backgrounds who choose to spend their holiday here.

I enjoyed joining our teen trips, taking part in their activities, and educating myself on how to better connect North American teens to Israel. One of these activities included an afternoon spent in an Ethiopian village in Southern Israel. This allows them to see for themselves how the 150,000 Jews who journeyed across both time and distance, who transformed their lives in this new place they call home, once lived in Ethiopia.

Our JMI teens visited Save a Child’s Heart, an Israeli-based, international non-profit that aims to improve the quality of pediatric cardiac care for children from the Palestinian Authority and from developing countries—creating centers of competence for them, thus improving access to cardiac care regardless of the child’s religion, gender, or nationality. Our teens spend time with these children, before and after surgery, using the language of laughter and smiles to win their hearts, while learning once again about how tikkun olam, repairing the world, is fundamental to Israel’s identity.

And while discovering the Jewish homeland’s beauty, achievements and wonders from north to south, the teens deliberate on what it means to be a Jewish teenager in North America today, where some face anti-Semitism on a daily basis in school, struggle with their Jewish identity, and want to discover where Israel fits into their lives.

The JMI teens come from diverse backgrounds and affiliations. Some have visited Israel before; some are visiting for the first time. For some, this may be their only trip. Some love the country’s vibe and energy, others its reputation as a high-tech superpower. Many simply revel in its many beaches and its creative cuisine. But they all share a similar notion—that spending Friday night at the Kotel is magical. It’s the glue, the thread connecting the dots, the reason why they are here. It’s their past, present and future. It’s the pride in being Jewish teenagers. It’s Michael Levin, it’s who they really are—connecting to their roots, leaving their whispers behind along with the tree they plant just before boarding the plane back home.

The JMI Teen Travel program is not a stand-alone initiative to engage JCCs with Israel. The team at JCC Association Center for Israel Engagement is now in the midst of preparing for a bustling fall with eight adult groups coming to Israel for transformative Israel journeys. These experiences join other Israel-related initiatives coming from the JCC Association Center for Israel Engagement, including working with a growing number of JCCs that host yearlong Israeli shlichim (emissaries), consulting with JCCs on Israel awareness and engagement, producing educational materials, connecting JCCs with Israeli community centers (matnassim), and much more.

Part of JCC Association’s vision is to connect JCCs to Israel, and this is a shared task for all JCC Association staff. Israel education and experiences are an integral component within our entire portfolio of Signature Programs—through the Sheva Center: Innovation in Early Childhood Jewish Education and Engagement; JCC camps (day and overnight); fitness, wellness and aquatics; arts and culture; JCC Maccabi®; Kivunim (training new JCC executive directors); JWB Jewish Chaplain Council; Merrin Teen Fellows and other professional cohorts—Israel engagement is woven throughout all our work.

JCC Association aspires to build a stronger and more vibrant North American Jewish community, and Israel is a building block within that vision. JCC Association has launched the Innovation Fund for Israel Engagement, an initiative to encourage JCCs to offer more Israel-related programming. JCCs have submitted their most innovative ideas, which are currently under review by our JCC Association Israel Engagement board committee. Part of their consideration when evaluating these proposals is how each program could be scaled and adapted to work in other JCCs. Awarding these catalyst grants will enable JCCs to support new and diverse programs to strengthen Israel engagement in every community.

Tomorrow morning, we will read in this week’s Torah portion, or parshah, Eikev: “For the Lord your God is bringing you to a good land, a land with brooks of water, fountains and depths, that emerge in valleys and mountains.” Michael Levin and others have fought so that this promised “good” land is today’s reality. Our reality to cherish and love, our home to live in and to visit. Our past, present, and future in which we take so much pride.