There Was No Silence

The Jewish calendar is ingenious. With more than 4,000 years of history, ours is a calendar literally filled with anniversaries of momentous events, both large and small; great celebrations and horrific tragedies. Many of the latter are commemorated on a single day, the 9th of Av (Tisha B’Av | תשעה באב). And so, it can be altogether too easy for certain dates to pass without any consciousness of their significance at all. September 5 and 6 are two such dates.

On September 5, 1972, during the Munich Summer Olympic Games, Palestinian terrorists infiltrated the Olympic Village and took eleven members of the Israeli team hostage, murdering wrestling coach, Moshe Weinberg, and weightlifter, Yosef Romano, when they fought back, bravely enabling a 12th teammate to make his escape. Following a tense day-long standoff between the terrorists and the West German authorities, the remaining nine hostages were murdered the next day, September 6, during a botched rescue attempt.

The International Olympic Committee, which had only briefly and reluctantly halted the Games during the first hours of the crisis resumed business as usual even before the events had run their course. No memorial was included in the closing ceremonies.

In the years that followed, Ilana Romano, Yosef Romano’s widow, and Anke Spitzer, the widow of murdered fencing coach, Andre Spitzer, began an increasingly valiant effort on behalf of the families of the Munich 11, to convince the International Olympic Committee (IOC) to honor their memories with a moment of silence at the next Olympic Opening Ceremonies. Their extraordinary efforts ahead of the 1976 Montreal Olympics proved to be in vain. Undaunted, they renewed their efforts thereafter with similar results. Los Angeles 1984. Seoul 1988. Barcelona 1992. Atlanta 1996. Sydney 2000. Athens 2004. Beijing 2008. Each time, notwithstanding periodic changes in the leadership of the IOC, the answers were the same. “It’s too political.” “The Arab countries would object.” “It’s not the right time.”

At the 2010 Winter Olympic Games in Vancouver, the tragic training-run death of Georgian Luge athlete, Nodar Kumaritashvili, resulted, very appropriately in a prominent public memorial and a powerful moment of silence during the Opening Ceremonies which took place later that same day. No mention was made of the Munich 11.  The IOC was further exposed for its continuing hypocrisy, a hypocrisy bearing the hideous face of Anti-Semitism. Anke Spitzer and Ilana Romano soldiered on, their focus turned to the 2012 Olympic Games in London.

For the JCC Movement, remembering the Munich 11 has been a part of the DNA of the JCC Maccabi Games® from the very first. Between 1982 and 1993, it was left entirely to the host community to determine the type and nature of the commemoration. Beginning in 1994, it became a mandatory component of every opening ceremonies in every host community. Over the past quarter of a century, the Games have been held 86 times in 57 cities; their opening ceremonies attended by more than 688,000 athletes and artists, coaches and delegation heads, volunteers and staff, host families, parents, siblings, friends, colleagues, well-wishers and plain-old-fans. Six hundred and eighty-eight thousand members of our community touched by lives of the Munich 11.

One of those host communities for JCC Maccabi in 2012 was the Rockland JCC in West Nyack, NY.  Rockland decided to dedicate the entirety of their Games to the Munich 11. They reached out to Anke Spitzer and Ilana Romano and to members of all of the families, beginning a remarkable relationship that has helped alter the course of their struggle. The run-up to the summer of 2012 included a petition drive that collected more than 110,000 signatures with signers drawn from over 150 countries. The campaign also drew the attention of political leaders and celebrities. The United States Congress, the British Parliament, the German Bundestag, adopted resolutions supporting a moment of silence and a host of other countries joined the State of Israel in calling upon the IOC to set things right in London.

With no change in the IOC’s position, leaders from the Rockland JCC joined the families for a high-profile press conference, convened across the street from the Opening Ceremonies in London, drawing media coverage from thousands of news sites and outlets across the globe. All to no avail. That evening, during the broadcast of those Opening Ceremonies, NBC host, Bob Costas, as part of his introduction of the Israeli delegation, decried the failure of the IOC to include a moment of silence for the Munich 11, and imposed a moment of his own; a six-second silence in the broadcast—a virtual eternity amidst a live, prime-time network television event. 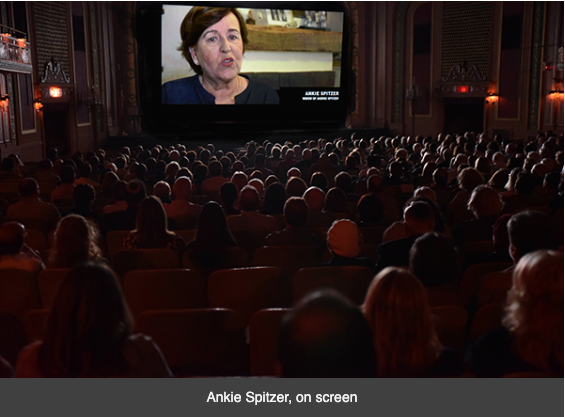 Last night the Rockland JCC hosted the premiere of the documentary film, There Was No Silence, chronicling the story of the nearly 50-year effort to introduce a moment of silence in memory of the Munich 11 to the Opening Ceremonies of the Summer Olympic Games. The 53-minute film is an inspiration. The tireless efforts of Anke Spitzer and Ilana Romano, now in their 70s, have been nothing short of heroic. And the part played by our movement, led by David Kirschtel, the Rockland JCC’s long-time CEO, and a host of extraordinary lay leaders including Jeffrey Degen, JCC Board President, Micki Leader, JCC board member, Gary Siepser, Rockland Jewish Federation and Foundation CEO , Rabbi Brian Leiken of Temple Sholom of New City, and JCC past-Presidents: Paul Adler, Barry Kantrowitz, Steve Gold, Steve Rosenzweig, Mitch Brill, and Joel Zbar, made every one of the more than 500 audience members feel like they were ten-feet tall.  Their little town.  Their unsung JCC had made this quest their own.  Joe Allen, director, producer and writer of There Was No Silence, has created a remarkable film about a unique tragedy that befell the Jewish world and the State of Israel, and the continuing efforts to provide the murdered Israeli athletes with their moment of silence.

There Was No Silence should be seen in every JCC.  It should be seen in every corner of the North American Jewish community. Six hundred and eighty-eight thousand members of the JCC movement family have already been touched by the story of the Munich 11. How many more have been touched through them.  Our friends at the Rockland JCC have already demonstrated our capacity to influence the course of history. But the work is not yet complete.

Following the London Games, the IOC’s new leadership seemed more open than those who came before and a first significant memorial ceremony was held in the Olympic village under its auspices at the 2016 Summer Games in Rio de Janeiro. But still, no moment for the Munich 11 at the Opening Ceremonies.  The 2020 Tokyo Summer Games begin on July 24. 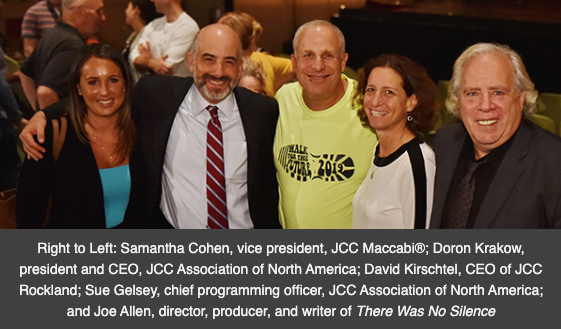 Perhaps There Was No Silence will be our clarion call to marshal the JCC Movement, inspired by our friends at the Rockland JCC, to join hands with Anke and Ilana, to quiet the crowd in Tokyo for a moment to remember Moshe Weinberg, Yossi Romano, Ze’ev Friedman, David Berger, Yakov Springer, Eliezer Halfin, Yossef Gutfreund, Kehat Shorr, Mark Slavin, Amitzur Shapira and Andre Spitzer.  Zichronam L’Vracha |  זיכרונם לברכה —May their memories be for a blessing.