If My Grandfather Could See Me Now

The Henry Kaufmann Campgrounds (HKC) are home to the day camps of 15 New York Jewish Community Centers (JCCs). Each year, three sites totaling roughly 500 acres—located on Long Island, in Rockland County, and on Staten Island—provide more than 7,000 campers with opportunities to grow, learn, and build connections with the Jewish community, Israel, and the wider Jewish world. Day camp and the magical experiences children take home with them each day are among the most powerful tools we have to create bonds between and among young families at a significant juncture along their road to greater participation in Jewish life.

JCCs operate the largest network of Jewish day camps in North America, and the largest collection of JCC day camps is at HKC, part of the organizational family of UJA-Federation of New York, which has made a priority of investing in these facilities in recent years. Yesterday morning JCC Association’s chief development officer, Jennifer Mamlet, and I participated in a remarkable celebration at HKC’s Rockland County site. Leaders of UJA Federation, Foundation for Jewish Camp, JCC executives, and a host of friends and well wishers gathered from across the New York metropolitan area to tour the site and recognize several philanthropic leaders whose generosity has made possible a magnificent outdoor pavilion, new basketball courts, and a state-of-the-art swimming pool.

The program began at the outdoor pavilion. Amy Bressman, president of UJA-Federation, and Eric S. Goldstein, its chief executive officer, spoke about the power of camp and its extraordinary impact on everyone whose life it touches—campers, of course, but also staff, siblings, and parents. They told us about HKC and the hundreds of thousands of young people who have called it their summer home since its founding in 1953. They beamed with pride when speaking about a plan adopted several years ago to invest $30 million dollars in upgrades and enhancements—and the more than $55 million they have invested since.

The donor, of course, was introduced with appropriate praise and accolades.

His first summer at HKC was in 1961 as a five-year-old. He talked about growing up poor, about his hard-working parents and their simple lives in New York City. He talked about the chance to spend days in the country—at camp—and about what he took home through stories and friendships that changed his life and affected his family. Summer after summer, he’d gone back to camp at HKC, and he reflected on how the spirit of camp had inspired in him an abiding commitment to Jewish community and to Israel.

He also shared that at times he hadn’t always followed the rules as diligently as he was supposed to. Imagine that. A kid at camp breaking the rules. Acting out. Maybe even getting into trouble. Years later, as a member of the staff, he’d learned a powerful lesson from a mentor. That mentor, a social worker, taught him that part of the value of camp is that it is a place where kids break rules from time to time, and some kids arrive with baggage from home lives that are more difficult or complicated than those of others. So, rules get broken, but camp is a place where kids learn, grow, share, and make friends—a safe place and a place that can change kids’ lives for good.

And that’s what happened to him.

Sixty years later, he’s a fixture in the New York Jewish community. A pioneer in Jewish service initiatives, in Jewish education and in fostering connections with Israel. He is a mentor to countless other leaders, an institution builder and role model. Yesterday he was celebrated for all of that—and for his extraordinary personal philanthropic commitment to HKC, the wellspring of his life as a Jewish leader. Before he closed, he mentioned that his grandfather had been a house painter, who earned $2 a week. Looking around at the magnificent edifice he’d funded and at the community of leaders, colleagues, and friends who’d turned out to share in the moment, he wondered aloud what his grandfather would think if he could see him now.

I’ve been to more dedications and celebrations of this kind than I can remember, but this one stands out. This one celebrated a professional colleague, the longtime CEO of the YM&YWHA of Washington Heights and Inwood, Martin G. Englisher

On behalf of the JCCs of North America, I extend my deepest thanks to UJA-Federation of New York; to the folks at the Henry Kaufmann Campgrounds, including the more than 1,400 staff members positively influencing the life of every camper there this summer; and, most of all, to my mentor and friend, Marty Englisher. 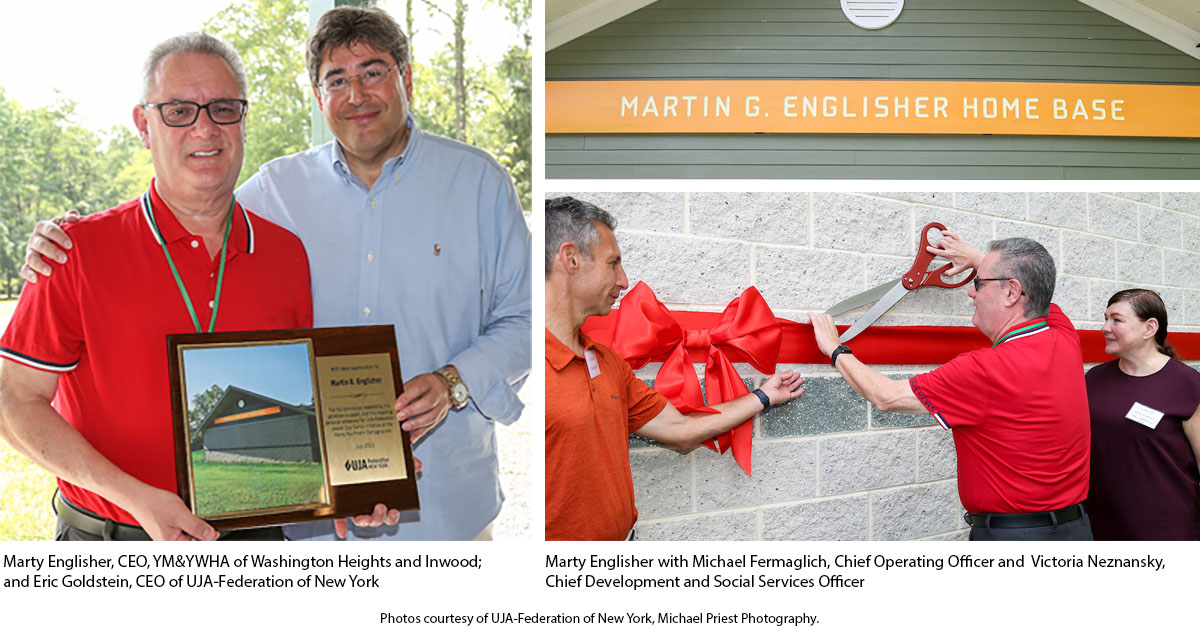 May he go from strength to strength.