Jerusalem stone. Those who have visited Jerusalem are struck by the colors. From the walls of the ancient city to the high rises of the new Jerusalem, the eternal capital of the Jewish people is truly a city of gold. And the centerpiece? The centerpiece is the Kotel, the Western Wall of the Temple Mount, the retaining wall above which the great Temple of King Solomon proudly stood for centuries until its destruction at the hands of the Roman Empire in the year 70 C.E. But throughout the millennia, the Kotel has remained at the center of the Jewish world, of the holy city, the soul of our people.

Some 10 days ago, together with my wife, Janet, my mother, my brother and his wife, and my son Aaron’s kibbutz father, Ruvik, I came to the great plaza facing the Kotel. We arrived in the late afternoon for a ceremony set to unfold at dusk; a ceremony at which my son would be sworn in as a tzanchan, a paratrooper, in the Israel Defense Forces.

Some 10 days ago, together with my wife, Janet, my mother, my brother and his wife, and my son Aaron’s kibbutz father, Ruvik, I came to the great plaza facing the Kotel. We arrived in the late afternoon for a ceremony set to unfold at dusk; a ceremony at which my son would be sworn in as a tzanchan, a paratrooper, in the Israel Defense Forces. 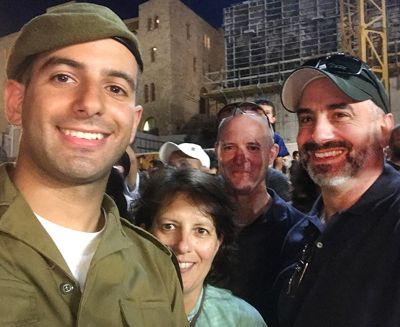 Twenty stations were arrayed before a stage, a gallery, and the flags and emblems of every IDF division. Above them flew the flag of Israel. And behind them, the Kotel.

At 7:30 p.m. they marched in. Hundreds of them. Proud young men. Row upon row. Taking their places at the designated location for each unit. They came to attention to salute the arriving dignitaries. The commanding officers of the tzanchanim and the chief rabbi of the IDF, himself a tzanchan.

As the ceremony unfolded, the sky—the very backdrop of the proceedings—changed from light to deepening blue, shade by shade into darkness. But not below in the plaza. As the sky darkened, the stones of the Old City, of the Kotel, grew brighter and more dazzling. And the words. The words recalled the price we’ve paid for freedom and independence. A memorial flame was lit to remember those who paid the ultimate price to bring us to this day. The slaughtered millions in the Shoah. The soldiers who fell in the wars of independence, in Sinai, in the six days during which the historic city of Jerusalem and the magnificent Temple Mount were retaken. Yom Kippur. Two wars in Lebanon. And the war on terror, which has been fought unabated for nearly a century. 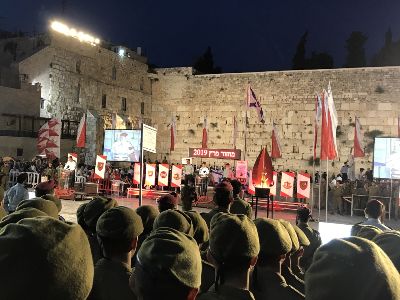 Poetry and song. A prayer for peace. Hatikvah. A poignant reminder that the defense of Israel—and the safeguarding of the Jewish people wherever they may live—are the responsibility of nearly every young Jewish Israeli, together with those of every background, irrespective of their socio-economic station, their academic achievement or their political affiliation. The young men who stood before us came from every corner of the nation. On this night there was no telling them apart. Red boots. Green uniforms. White T-shirts. Berets. At the appointed moment, they stepped forward. One by one. To receive their weapon. To receive their Tanakh (תנ”ך), their Bible. The latter is carried by every IDF soldier. A powerful reminder of the wellspring of our people and its everlasting ties to this land. To this city. To this wall.

After the salutes. Back in formation. Standing proudly at attention. The oath was read by their commanding officer:

“I swear and commit to maintain allegiance to the State of Israel, its laws, and its authorities, to accept upon myself unconditionally the discipline of the Israel Defense Forces, to obey all the orders and instructions given by authorized commanders, and to devote all my energies, and even sacrifice my life, for the protection of the homeland and the liberty of Israel.”

My son has taken his place as a defender of Israel and the Jewish people. Pledged to give his life. My son. And that night, perhaps a thousand other sons. Our sons.

In the coming months, they will complete their basic training before being deployed where the needs arise. They will stand before us because it has fallen to them to shield us, and to ensure our freedom. It falls to us to stand behind them. We, the Jews of the world whose safety and security as Jews are assured by the sovereign Jewish State and by those who defend it. We are called upon to support and defend them. That is our part in our shared destiny as a people. And now, all together as one: Ani Nishba—אני נשבע. I swear.