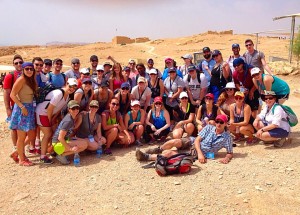 With a goal of enriching JCC staff knowledge of the Jewish homeland and enhancing its presence at their community centers, 20 young JCC professionals participated in JCC Association’s first Birthright trip organized specifically for this cohort.

The trip was unusual, as participants ranged in age from 22 to 29, somewhat older than typical Birthright participants. They came from 20 JCCs across the United States and hold a variety of positions at their JCCs. They include those who work in fitness and recreation fields, donor relations, sales and membership, camp, teen programming and early childhood education. Most had never visited Israel before.

The itinerary included traditional touring as well as activities and learning geared to the interests of those who staff and program at Jewish community centers. The trip took place from May 18-28,

“It’s a cliche to say that ‘words cannot describe,’ but in the case of my JCC Young Professionals Birthright experience, the phrase is, indeed apropos,” says Ross Houston, TK position, JCC Chicago. “Not only did I get to celebrate Shabbat at the Kotel, visit the resting places of Israel’s bravest sons and daughters on Mt. Herzl, kike up and down Masada, and learn more about all of the Jewish state’s people and the events that made it what it is today, but I also had the opportunity to brainstorm and network with colleagues both domestic and foreign about ways to improve our JCC.”

In addition, the group took a camel ride and slept in a Bedouin tent. They toured Yad Vashem, Israel’s Holocaust museum and visited Ramat Hanegev R&D Desert Agriculture Center, learning about cutting edge agricultural research. They learned about the border communities in the Golan Heights; and met a young film director from the Maaleh film school, which trains filmmakers to produce work inspired by their Jewish heritage.

Talent is a pursued interest. That is to say, anything you practice you can do. Let’s go up in here, and start having some fun We must be quiet, soft and gentle. Get tough with it, get strong.

This is your creation – and it’s just as unique and special as you are. I was blessed with a very steady hand; and it comes in very handy when you’re doing these little delicate things.

“Most of our participants had never been to Israel,” said Joy Brand-Richardson, associate vice president of professional development for JCC Association. “Experiencing it in a group of peers gives them a unique perspective and allows them to learn and discuss in a way that’s relevant to the work they do. They get to hear, smell, taste and touch Israel firsthand, and bring that immediacy back to their work in the JCCs.”

The group visited Matnas, the equivalent of JCCs in the United States, and observed and participated in a program for children with special needs. This program, Krembo Wings, uses mostly teen counselors who volunteer to work with the less abled children. They also learned about the governance and funding of Matnas and discussed what they learned in smaller groups with their Israeli counterparts.

Talent is a pursued interest. That is to say, anything you practice you can do.

“We were so excited to be able to send a staff member who had never been to Israel on a JCC Association sponsored Birthright trip,” said Ivy Harlev, executive director of the Siegel JCC in Wilmington, Del. Her JCC sent Abigail Henkin, director of youth, family and teens. “We wanted her to find a personal connection with Israel and we wanted her to be in an environment where she could explicitly connect the experience with the work she does at the JCC. This was a life-changing experience for her and will surly benefit her work here at the JCC and in the Jewish community beyond.”

A trip highlight included bar/bat mitzvah ceremony for participants in a park, overlooking the Knesset, Israel’s parliament building. Many chose their own Hebrew names, and they led the service, which included a discussion of the Torah portion of the week and celebratory singing and dancing.