May You Live Through Interesting Times

One of my favorite fortune cookie fortunes says, “May you live in interesting times,” and certainly, these are some extremely interesting times. I wrote this message while sitting in a wonderful cigar lounge in the Kingdom of Bahrain. The lounge, which looks like it could be in a scene from a James Bond movie and one from “Casablanca,” is the perfect setting to mull over the events of the last several days as a participant in the first-ever Abrahamic Traditions Interfaith Dialogue. This two-day conference was sponsored by the United States Navy’s Fifth Fleet and Central Command. As director of JWB Jewish Chaplains Council® (JWB) it was a rare privilege to represent the American Jewish community in this new endeavor.

These conference sessions addressed the commonalities and differences among Christianity, Islam, and Judaism, as well as robust discussions on the impact religion has on military operations in the North Arabian Gulf region (formerly known as the Persian Gulf region). Participants also visited and attended meetings at the Bahrain Great Mosque, the Sacred Heart Catholic Church, and the small, historic Bahrain Synagogue. The conference’s stated goal was to understand the religious underpinnings of the Abrahamic faiths to create dialogue as a first, small step in supporting peace, security, and helpful U.S. engagement in the region. Its timing was meant to coincide with the second anniversary of the signing of the Abraham Accords and a historic first trip by Pope Francis to this small Gulf state.

As I puffed on a great cigar, I smiled to myself, recognizing that the conference itself was not what made these past few days “interesting times.” Rather it was the presence and participation of Rabbi Ofir Tubul, chief rabbi of the Israel Navy, who joined me in conversations with imams, Catholic priests, senior U.S. Navy officials, Middle East experts, and military planners. (With the signing of the Abraham Accords, the U.S. military invited the State of Israel to move from the U.S. European Command (EUCOM) to its Central Command (CENTCOM), further facilitating dialogue with Israel’s new allies in the Middle East.) During the conference, attendees heard firsthand—and some for the first time—from two rabbis about Judaism and the unique place of Israel and Jerusalem in our tradition—and in our hearts. These are interesting times, indeed. 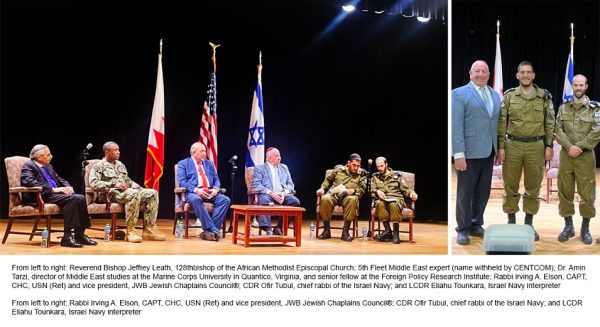 One closing thought: This message will be distributed on Veterans Day, a national day of observance during which we recognize the service of millions of men and women who have fought to protect our country and its values. It does not escape me that only because U.S. service members before me put themselves in harm’s way in the face of oppressive regimes—past and present—that I could travel to this exotic Middle East kingdom to represent our faith and our people among former enemies, new friends, and recent partners. For this reason and so many others, on this day, and every other day, JWB and JCC Association of North America proudly proclaim: “Thank you!” to our veterans.