This was a short trip to Korea, only five days “boots on the ground,” and yet I felt so much was accomplished in such a little time.

JWB has a policy of visiting first-tour chaplains around the time they enter six-months on active duty, and all chaplains are visited every 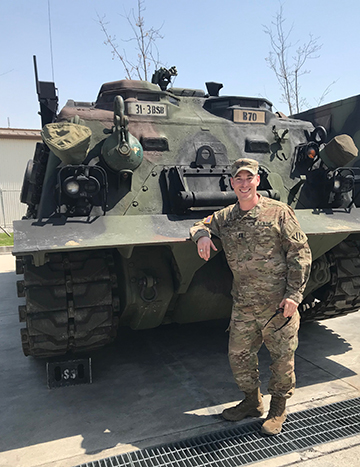 two years. Rabbi Michael Cohen graduated from HUC last summer and re-entered the Army as a chaplain. I say re-entered because prior to rabbinical school he was an Army sergeant, specially trained with special forces in psychological warfare. He made two combat deployments to Afghanistan with them as a SpecOps guy. More about him in a minute.

I first want to describe to you the “environmental” factors he is working in. Rabbi Cohen set my schedule, including a day-long trip to the DMZ (demilitarized zone) on my first day. It was important, he felt for me to see his “battlespace.”

Traveling by car less than 35 miles from Seoul we found ourselves the guests of the Korean Army’s 25th Division. At briefings, I was told and saw via binoculars that less than 1 km away was the North Korean Army. They explained that South Korea is surrounded on three sides by enemies, North Korea, China and Russia.  All the soldiers at the DMZ, both Korean and U.S. carry their weapons in Condition 1—magazines loaded and a round in the chamber. The motto of the U.S. 8th Army assigned to protect Korea, which they take very seriously, is “Ready to fight TONIGHT!”

Small skirmishes are not uncommon and the biggest threat day to day is North Korean infiltrators who attempt to cross the border for sabotage. We were taken to one of four tunnels found about a decade ago, dug by North Korea and capable of sending 30,000 troops a day southbound if an invasion occurred.  Both Rabbi Cohen and I mentioned to our hosts how similar the situation was in Israel.

Back to Rabbi Cohen…Michael is not only assigned as one of three rabbis covering the entire country but Is also the chaplain of the 750-soldier strong 3rd Support Battalion of the 2nd Infantry Division. His battalion provides support to infantry battalions, with everything from mechanized vehicles to refuelers, to tank repair tracked vehicles.

Training to fight tonight requires these soldiers to sleep little, and often work around the clock during their nine-month deployment. Walking around his battalion area I saw just how popular Rabbi Cohen is among his soldiers. They all know him and like him. I visited with his commander, and we spoke about his transition from enlisted to officer and from special forces to chaplain. The days and long car rides we took to visit other bases gave me the opportunity to advise him and mentor him, in particular on these areas. 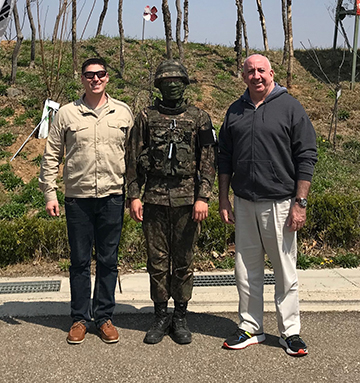 In addition to his battalion duties, he also conducts weekly Shabbat services and serves as a rabbi resource to all the other bases in Korea. He mentioned that he conducted four  “Days of Remembrance” ceremonies (Yom HaShoah) around the peninsula for Army and Air Force bases. He also conducted sedarim during Pesach for Jewish personnel. A huge source of pride for him is his JWB Torah, which travels around in a specially procured weapons-hard case, re-designated as his traveling Torah case. For someone who is just out of rabbinical school, he is doing some pretty remarkable things under some remarkable circumstances.

My third day there, a second Army rabbi arrived for a 24-month stint and this summer an Air Force rabbi will also arrive to complete the team. We visited five bases altogether, giving me a great perspective as JWB director of the distances and scope of mission for our rabbis there.

We are fortunate to have 33 Michael Cohens out there doing great things for our people.