This week saw the return of the JCC Maccabi Games®. In this, its 40th year, the Games drew 1,600 Jewish teen athletes from 57 delegations and 67 JCCs across Canada and the U.S., as well as delegations from Bulgaria, Mexico, and Israel, to San Diego for a week of competition and much more at what can reasonably be called the Olympics for North American Jewish teens. With the 2020 and 2021 Games lost to the COVID-19 pandemic, these Games were a particularly long time coming, making the return to action all the sweeter.

Venues across San Diego County provided the settings, and the incredibly enthusiastic group of athletes provided the intensity, the heart, and the spirit of the Games. But the competitions were only the beginning. Community service projects and HangTime with Israeli shlichim (emissaries) and Team Israel amplified the experience, all of which was supported by more than 400 coaches and staff who traveled with their teams from every corner of the continent. Three-hundred-and-fifty families from San Diego’s Jewish community opened their homes, notwithstanding the continued complexities of the pandemic, to more than 1,000 athletes and the University of San Diego played host to the rest. Dozens of Jewish community institutions in the region joined together in partnership, bringing resources, facilities, and hundreds of volunteers to bear to ensure the experience would be long remembered by all.

For the athletes, the two-year hiatus meant that a majority were first-timers. Wide eyed, they marched into the opening ceremonies before thousands of cheering friends, family members, and supporters in the grandstand, all there to help make dreams come true. The ceremonies were further highlighted by the pomp and circumstance of the national anthems, the torch lighting, and a powerful and moving tribute to the victims of the Munich Olympic massacre. A feature of every JCC Maccabi Games’ opening ceremonies, this year’s remembrance marked five decades since the darkest days in the history of the modern Olympic Games. Former NFL player and pro wrestling superstar Bill Goldberg provided the exclamation point when, with tears in his eyes, he announced to the packed house that as a Jew from Oklahoma, who has seen the face of antisemitism and experienced both triumph and stardom, participating in these opening ceremonies was the proudest moment of his life. 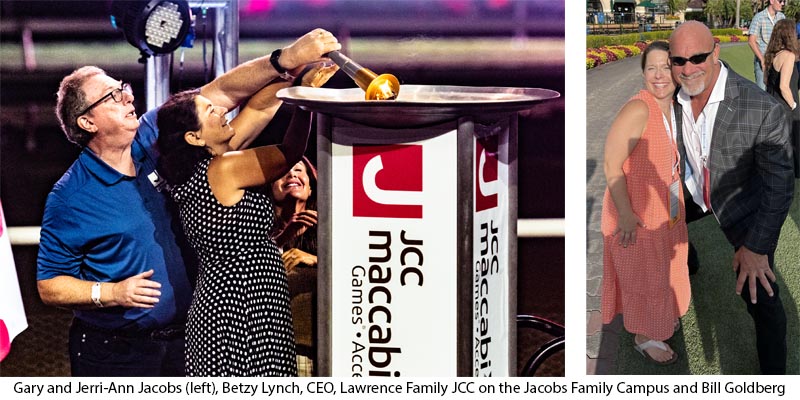 The JCC Maccabi Games are unique. Undertaken in partnership with Maccabi World Union, the organization that hosts the international Maccabiah in Israel every four years, they are more than an extraordinary athletic competition. Nearly two-thirds of all participants are otherwise uninvolved in Jewish life when they first take part—and for the majority of those, JCC Maccabi is a gateway to connections with peers, their JCC, and our movement’s commitment to Jewish service, greater Jewish community, and Israel.

This year’s Games will be remembered for something else, too: the launch of the first-ever JCC Maccabi Access Games. The JCCs of North America are gathering places—the town square of the Jewish community through which every community member can find a way to be part of something larger than themselves. Unfortunately, people with disabilities are sometimes precluded from accessing much of what we do, and we can’t be satisfied with that. Their exclusion deprives them of participation in the Jewish community—diminishing the rest of us in the process.

With steely determination and tireless advocacy, JCC leaders, including Scott Ehrlich at the David Posnack JCC in Fort Lauderdale, Florida; Todd Rockoff at the Tucson JCC, Arizona; and Betzy Lynch at the Lawrence Family JCC on the Jacobs Family Campus in San Diego, California, have been urging JCC Association and the wider movement to embrace a commitment to ensuring that all members of our community, in spite of any disability, can take part in what we do. Former JCC Association staff members Robin Ballin and Dr. David Ackerman took the early lead in our continental initiatives, and with the remarkable vision of Mark Horowitz and our partners at the Crown Family Philanthropies, a new operating unit was established to spearhead this work, led by Liv Mendelson and Sierra Weiss. A centerpiece of this burgeoning effort has been a commitment to making our flagship JCC Maccabi Games newly accessible to teens with cognitive and developmental disabilities. And so, JCC Maccabi Access was born.

The inaugural Access Games took place this week in San Diego, as seven remarkable athletes from five JCC communities and the Shaar HaNegev Regional Council in Israel joined their 1,600 peers—marching in the parade of delegations at the opening ceremonies; competing together in swimming, soccer, basketball, bowling, and more; and ascending the stage to accept the medals they earned as competitors. For each JCC Maccabi Access athlete, the event was a triumph, but even more so, it was a triumph for the JCC Maccabi Games, for the Jewish Community Center Movement, and for the North American Jewish community.

These seven athletes were the first: Colby Berman, from Miami; Shay Kligiar, from Israel; Tammy Kroll, from San Diego; Sienna Longman, from Fort Lauderdale; Rachel Lowenthal, from Tucson; Michal Samid, from Kibbutz Gevim, near the Gaza border in Israel; and Josh Sternlieb, from San Diego. Our pioneers. They charted new territory and opened our eyes to remarkable possibilities. Thanks to their leadership and example, next year JCC Maccabi Access in Fort Lauderdale will be a durable component of the JCC Maccabi Games. We look forward to welcoming a far larger group of Access athletes and delegations from a growing number of JCCs. In the years ahead, hundreds and then thousands of athletes with disabilities will trace their engagement with a wider Jewish world to these seven extraordinary young people who pushed us to new heights this year. It was one of the great experiences of their still young lifetimes, but perhaps we were the true beneficiaries as they made it possible for us to see and understand that community is something broader, greater, and more meaningful than many had previously understood.

We salute all who brought our JCC Maccabi Access dreams to life. Our hearts overflow.