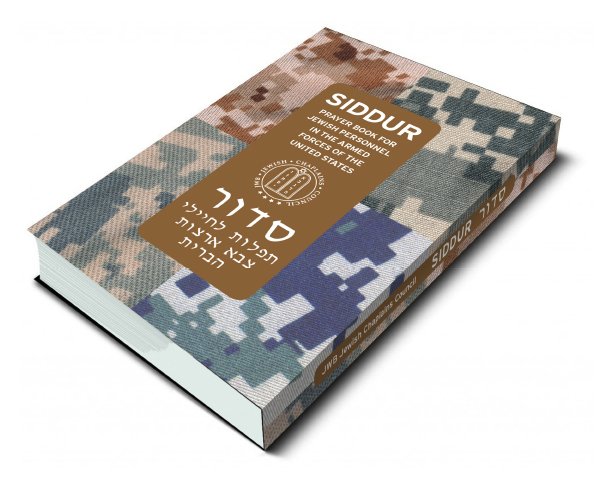 A unique prayer book commissioned by the JWB Jewish Chaplains Council will be first used at Shabbat services on Friday and Saturday, March 28-29 during the JCC Association Biennial in San Diego. It is the first time since World War II that a siddur, Hebrew for prayer book, has been created expressly for use by the men and women serving in the United States military.

The siddur has been put together with the cooperation of rabbis in all three major Jewish movements and incorporates Hebrew and English text from their existing prayer books expressly for use by the JWB. The movements have allowed the “copyright of exception,” according to retired Rear Adm. Rabbi Harold Robinson, director of the JWB Jewish Chaplains Council, a program of JCC Association.

“We had the ability to move freely through their prayer books, allowing us to create a book that each rabbi can use differently,” he said. “Yet for each soldier, sailor or marine, it will be the same, no matter where he or she is stationed.”

The impetus to create the siddur dates to 2006. The JWB Jewish Chaplains Council advisory board realized that its chaplains were using a variety of prayer books depending on what the rabbi or trained lay person leading services chose to use. This was often the prayer book with which he or she was most comfortable, or simply what was available at the base. This worked adequately for the rabbis, but wasn’t as successful for Jewish service men and women, who had to get used to a new siddur as they moved around from base to base.

The prayer book has been put together with the help of representatives each from the Orthodox, Conservative and Reform movements. They have all had a chance to weigh in with suggestions and edits so that the prayer book would be something that rabbis in all the movements would want to use.
The CCAR is proud to have been part of the process of creating a siddur to meet the unique needs of Jews in the military,” said Rabbi Hara Person, “We are grateful that all the streams of Judaism were able to come together and cooperate, under the outstanding leadership of Rabbi Harold Robinson, for the sake of producing a siddur for our servicemen and women.”

Because of the special copyright, the book will be restricted to use in branches of the military and by the Department of Veterans Affairs. It is not meant for congregational use, said Rabbi Robinson. The goal was to create something that borrowed from source material from all streams of Judaism, and is exceptional in that rabbis across denomination have been authorized to use it, even with inclusion of liturgy from other denominations.

The first prayer books published by the JWB date back to World War II and many still exist. That edition was an abbreviated one. The Orthodox movement, at that time, then issued a companion edition to meet the needs of Orthodox military personnel. In the early 1980s, the prayer book was updated and reintroduced.

But since that time, each major Jewish movement has published a new edition of its own prayer book and it was about time that JWB followed suit, Robinson said. The changes include gender-neutral language, Hebrew and English text, as well as transliterations of the Hebrew.

It is also believed to be the only prayer book of any religious group that includes a forward by President Barak Obama, acknowledging the sacrifices made by the men and women who choose to serve their country.

The siddur was underwritten with donations from Josh Landes, whose father, Aaron, is a retired Navy chaplain and admiral, and is intended for distribution to every service man and woman currently serving in the armed forced. Other donors include David Ackerman, director of JCC Association’s Mandel Center for Jewish Education; Fran and Alan Broder, longtime supporters of the JWB; and the Slomo and Cindy Silvan Foundation.