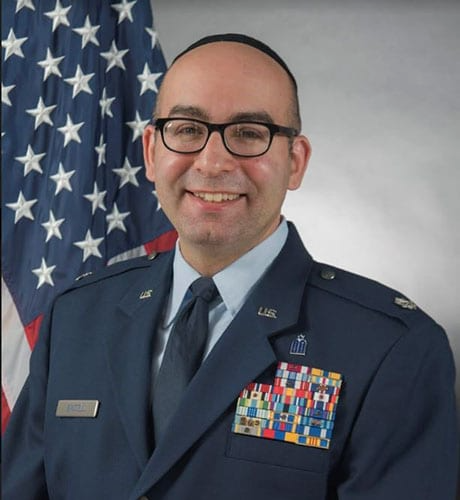 As deputy director, he will help equip and train 600 Chaplain Corps personnel serving in 90 wings and supporting 107,000 airmen. He also will advise  senior National Guard  leaders about religious freedom, religious accommodation, programming, and readiness, among other matters and is responsible for developing, overseeing, and implementing strategic transformation of the Air National Guard Chaplain Corps.

“As the pandemic continues to rage and demands are placed on guard units to care for and protect civilians,” says Rabbi Irving Elson, vice president and director of JWB Jewish Chaplains Council®, “Colonel Bindell’s efforts to train others to create meaningful Jewish life, fulfill spiritual needs, and combat loneliness and isolation among airmen is more critical than ever.”

Bindell was commissioned as a First Lieutenant in the United States Air Force Reserve in 2000, and in 2002, he joined the New Jersey Air National Guard as a chaplain in the 108 Air Refueling Wing. In 2009, he was selected as the first full-time support chaplain for the New Jersey National Guard, and the next year, he was assigned the state command chaplain. In April 2014, he was assigned as the wing chaplain for the 108th Wing, Joint Base McGuire-Dix-Lakehurst, New Jersey. He has been mobilized in support of Operations Hurricane Katrina and the Global War on Terrorism.

JWB Jewish Chaplains Council® (JWB) is a nonprofit, U.S. government-accredited agency that serves the religious needs of Jewish military personnel and their families, wherever they serve, as well as patients in VA hospitals. Founded in 1917, on the cusp of World War I, the Jewish Welfare Board (JWB), as it was known at the time, sought to serve young Jewish men entering the military. Today, JWB Jewish Chaplains Council®, a signature program of JCC Association of North America, continues this work by honoring the service of Jewish men and women in the United States armed forces, safeguarding their rights, fulfilling their spiritual needs, and combating loneliness and isolation.

About JCC Association of North America

JCC Association of North America leads and connects the JCC Movement, advancing and enriching North American Jewish life. With 1.5 million people walking through the doors of more than 170 Jewish Community Centers and Jewish Community Camps (JCCs) each week, the JCC Movement is the largest platform for Jewish engagement on the continent. JCC Association, the convening organization of this dynamic network, partners with JCCs to bring together the collective power and knowledge of the entire JCC Movement, including 12,000 full-time and 41,000 part-time and seasonal professionals. By supporting them, together we enhance and strengthen Jewish life throughout North America. Learn more at JCCA.org or on Facebook, Instagram, and Twitter.