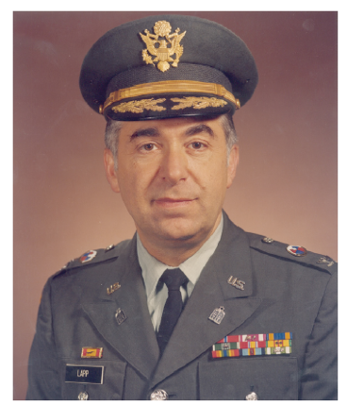 Rabbi David E. Lapp was born in Austria in 1931 and lived there until 1940, when his family emigrated to the United States. A graduate of Yeshiva University, Lapp received his rabbinical ordination from the Isaac Elchanan Theological Seminary in 1957, the same year he was commissioned as a lieutenant in the U.S. Army Chaplain Corps, eventually advancing to the rank of colonel, which at the time was the highest rank for a Jewish chaplain. He undertook chaplaincy studies at Command and General Staff College at Ft. Leavenworth, Kan., and the Army War College in Carlisle, Pa.

As a military chaplain for 25 years, Lapp served in the U.S. and around the world, tending to the spiritual needs of Jewish military personnel along with those of other faiths. As an assistant chaplain in Germany, he brought Jewish worship and life to Jewish military personnel stationed in Munich, Augsburg, and northern Italy and served as stockade chaplain at Dachau. At a Jewish conference during his service in Germany, Lapp held a Torah study session attended by 500 people at the General Walker Hotel, which originally had been part of Hitler’s retreat in Berchtesgaden before the Army converted it to the hotel. When he returned to Germany a decade later, Lapp was the 1st Armored Division chaplain at Nuremberg. In between, Lapp served for a year as a deputy chaplain in Vietnam (1966-1967), where he not only guided military personnel but also built relationships with residents, lectured at a seminary, helped build a nursery, and brought food and clothing to nearby villages. Upon his retirement from military service, the U.S. Army awarded Lapp the Legion of Merit.

From 1982 until he retired from professional life in 2006, Lapp was the director of JWB Jewish Chaplains Council® (JWB), a signature program of JCC Association of North America. In this role, Lapp trained and guided Jewish chaplains and lay leaders to serve the religious needs of Jewish military personnel and their families worldwide, safeguarding their rights, fulfilling their spiritual needs, and combating loneliness and isolation. Among his proudest accomplishments during his tenure with JWB was working with rabbis from the Reform, Conservative, and Orthodox seminaries to produce the first-ever trans-denominational siddur (Jewish prayer book) for military personnel and playing an instrumental role in helping the U.S. Army provide ready-to-eat kosher meals to soldiers in the field.