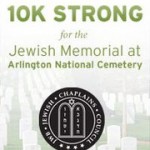 Just in time for Memorial Day, the U.S. Senate passed the necessary resolution to place a memorial to fallen Jewish chaplains in Arlington National Cemetery, next to existing memorials to Roman Catholic and Protestant chaplains. A similar resolution passed the House of Representatives earlier in the week. JWB Jewish Chaplains Council, a division of JCC Association, has led the effort to correct what was seen as a longstanding wrong. “We are immensely gratified that this sad oversight is about to be corrected,” said Rabbi Harold Robinson, director of JWB Jewish Chaplains Council. “Finally, these fallen chaplains will be brought home to their comrades in ministry.” The presentation made to the Congress is below.

Proposal to Donate Jewish Chaplains Monument to Arlington National Cemetery
N.Y. Representative Anthony Weiner and N.Y. Senator Charles Schumer introduced resolutions in the House of Representatives and the Senate to authorize the memorial. Florida Representative Miller and Washington Senator Murray are chairs of the veterans services committees in the House and Senate, respectively. Senator Richard Burr of North Carolina is the ranking Republican on the Senate committee.

The next step was approval of the monument’s design by the U.S. Commission of Fine Arts when the Commission met in June.  After approximately six weeks for fabrication, the plaque will go on tour to different communities, giving people a chance to see it and learn more about the role of Jewish chaplains. JWB hopes to have the dedication in Arlington during the fall to commemorate the 150th anniversary of Jewish chaplaincy. The first Jewish chaplain was commissioned in 1862, in the midst of the Civil War.

The JFNA, Jewish War Veterans, and the Sons of the American Legion were among the many communal organizations that worked tirelessly to get the resolution passed. The project was initiated when Ken Kraetzer’s discovered that Jewish chaplains were not memorialized on Chaplains Hill in the same way as others. A member of Squadron 50 of the Sons of the American Legion, in Pelham, N.Y., Kraetzer was doing historical research on memorials in Rhode Island. He was familiar with the story of the USS Dorchester, which the American Legion focuses on annually in commemorations all over the country, and wondered why Rabbi Goode was not among those listed at Arlington. One of the transformational moments in American life was the heroic sacrifice of the four chaplains of the USS Dorchester, which was transporting 900 soldiers and civilian workers to the European front when it was sunk by German torpedoes off the coast of Greenland on February 3, 1943. Each of the four chaplains on board spontaneously gave his lifejacket to another soldier, and the chaplains perished together as they prayed and sang hymns to men in lifeboats and in the icy water. The chaplains represented three faith traditions—two Protestants, a Catholic, and a Jew—and their death marked the first time the term “Protestant, Catholic and Jew” was used to describe America. Three of the four are memorialized on Chaplain’s Hill, but neither Rabbi Alexander Goode nor any of the other rabbis who died in other active service situations are so remembered.