Unfortunately, and sadly, to our greatest surprise and even greater disappointment, the war, which had taken a few days’ break, is now back, full speed. Since yesterday afternoon, eight hours before the extended cease-fire was to end, Hamas fired rockets into Israel. Since then more than 100 rockets have been fired across the country, including at Tel Aviv and Jerusalem. Israel’s IDF has responded by hitting different targets in the Gaza Strip, including the home of one of Hamas’ leaders.Hamas claims it violated the cease-fire in response to Israel’s persistence and refusal to give up on what Israel considers major security issues. A Hamas spokesman was quoted, saying: “If Netanyahu doesn’t understand … the language of politics in Cairo, we know how to make him understand.”In response to the missile attack, Israel decided to recall its delegation from Egypt, where it had been holding indirect talks with Hamas.The days of war are here again, where being glued to the news is the routine; where all TV and radio shows are constantly interrupted by siren announcements; where people you know are drafted; where anxiety, worries, frustrations and choked throats take over.But even today, when despair and disappointment are in the air, I find hope and pride. Israel Lacrosse, founded in 2010 aims to develop the sport of lacrosse in Israel. The Lacrosse team operates mainly in Ashkelon, one of Israel’s southern communities that was and still is being heavily hit by Hamas rockets.Earlier today I spoke with David Lasday, Lacrosse Israel director of youth development. I met David and his staff a few months ago when I 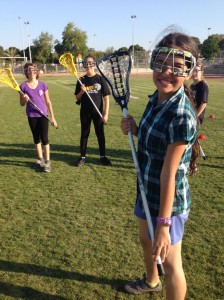 was visiting Ashkelon with the leadership of the JCC of Greater Baltimore, Ashkelon’s sister city. I have to admit, this was the first time I had ever heard the word “lacrosse”  or, for that matter, head even seen a game. I found it very cool.David, originally from St. Louis, moved to Israel six years ago and spends most of his time between Ashkelon and Tel Aviv, developing the sport in his new country. David spoke with me today about what it has been like, running lacrosse day camps in Israel for hundreds of teens during the war. He has been operating clinics and games in between sirens, running back and forth to the nearest bomb shelter and making sure kids and staff have been safe.One of the things Lacrosse Israel did this summer was to offer a special lacrosse day camp in the Tel Aviv area for kids from Sderot, a city closest to the border with Gaza and one that has been a Hamas target for 14 years.
David recently returned from Cherry Hill, N.J., after participating in the JCC Maccabi Games. He joined the Israeli lacrosse captain, a group of 12 women on the Israeli national lacrosse team and four Israeli lacrosse players — two from Ashkelon and two from Tel Aviv — who joined the Baltimore group. The Baltimore delegation, together with the two Ashkelon boys, won a shiny gold medal — probably one of the very few shining moments these kids from Ashkelon had all summer. Use this link to read more about their beautiful story.David told me about the special bonds the four Israeli boys and their host families in Cherry Hill formed. These bonds led to immediate phone calls last night, as soon as the cease-fire broke and Hamas renewed their missile attacks on Israeli towns. David told me the host families from Cherry Hill and Baltimore felt as if these rockets had hit home because they became so close with their new Israeli friends. 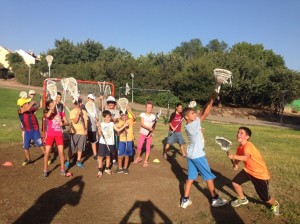 Together with David and his American friends running Lacrosse Israel are 20 American volunteer interns. One of them is Taylor Roy from Mill Valley, Calif. Taylor arrived in Israel three months ago and despite her family’s concerns, decided to stay in Ashkelon during this very difficult summer. Taylor describes her work with kids from Ashkelon as a unique mission and opportunity to provide these kids an escape from the day-to-day reality. Caring for hundreds of children, making sure they were safe during a war, while keeping her own concerns in check, wasn’t easy for Taylor, who grew up in the San Francisco area. This was not something she was used to doing.The moment Taylor described the way she feels about Israel brought tears to my eyes.  Listening to this amazing young girl, who decided to volunteer in Israel during a war, so far from home, was a real moment of hope for me during a very difficult summer! To hear her use the word “pride” to describe her experience, is to find something beautiful in a very dark place. Taylor decided to make aliyah and move to Israel permanently. These past 44 days made Taylor understand what Israel faces so much better than ever before. She realized how great the gap is between her experiences living in Israel and what the media reports back home in the United States. She felt the dissonance between how her American friends see Israel and  how she experiences Israel on a very basic level. Having Israeli friends fight in Gaza made it all very personal for Taylor; she describes herself as fortunate to have been here at such a difficult time, in what has been one of the most special and meaningful experiences she ever has had.After speaking with David and Taylor, I think we are the fortunate ones. Having these young American Jews tie their fate with ours, throughout a time of crisis, and feeling such pride for this country, is a great Jewish moment. It is one of pride for all of us — thank you Taylor and David!You can experience David and Taylor’s pride firsthand, along with others from the JCC Movement, when we visit them, along with other residents of Ashkelon during the upcoming solidarity trip. You will meet Israelis living in different areas of Israel’s south and can express solidarity and gratitude to our extended family in Israel and experience what it “Jewish peoplehood” really mans. The JCC Movement is planning this solidarity trip to show support for the people and the country for Israel between Oct. 31 and Nov. 5.If you are interested in joining this very special opportunity, please contact me directly at leah@jcca.org.Signing off with hope that this renewed fighting be as short and painless as possible for all sides.