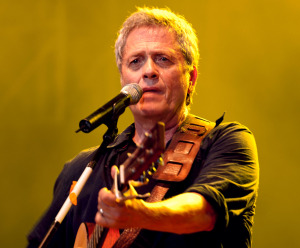 Israel’s fall brings the first rain and wind, and tries to wash away 50 days of fighting and the memories of the long, painful and frustrating summer war we fought against Hamas. But Mother Nature’s attempts to blow away summer nightmares aren’t very successful.

A few days ago we took our family to Shlomo Artzi’s concert. For decades, Artzi has been and remains one of, if not the, most popular Israeli singers here. He is most associated with good old, classic Israel. Thousands attended the concert, where 63-year-old Artzi worked his magic with the audience, making us dance and sing along to his beloved songs.

While walking downstage to talk with the audience, a young woman whispered something into his ear and gave him a note. When Shlomo walked back on stage, he turned to her and began singing his beautiful song “Wiping the Tears for You” in memory of her husband, Yair Ashkenazi, killed in Gaza this past summer. When Artzi read Ashkenazi’s name from the note that the young widow had handed it to him, the thousands at the concert immediately, as one, stood up and applauded. This was a great, spontaneous moment of collective shared pain, unity and solidarity. Not planned, not orchestrated, and so real and meaningful!

Singing and dancing for two hours didn’t really erase our sorrow. The rain that fell on us at the beginning of the concert didn’t wash away our pain; it just added another dimension — the angels crying with us for the loss of our brave man.

And now, only weeks after the last rocket was fired, and between these painful reminders of what we have been through, Israelis find themselves debating the cost of living, the financial burden of defending ourselves, just what it takes and maybe that it’s easier living elsewhere.

Israel post-Gaza War is busy with a new chocolate pudding protest and whether it is better to live in Berlin. A few days ago a young Israeli began a Facebook campaign calling on his fellow citizens in Israel to move to this bustling German city. Life is cheaper there than in Tel Aviv, he wrote. The 25-year-old Israeli, who lives in Berlin, posted a shopping bill on the social media network and challenged his readers: “Find any supermarket in Israel where you can get all of items for less.” “See you there!” he wrote. Israel’s politicians are outraged.

Take a minute to travel back in time with me exactly 107 years ago today, to the establishment of Bar-Giora, a Jewish self-defense organization in pre-state Israel. Bar Giora provided guard services for Jewish settlements and communities and later led to the founding of Hashomer, or Guardsmen. This legendary organization eventually grew into what became Israel’s Defense force. Hashomer ‘s vision and values were very simple: This is our land, it is our job to protect and defend it and we are responsible for it, even when it’s dangerous, uncomfortable and at times, costly.

One hundred years late, a group of young men and women decided to revive “Hashomer” and formed The New Shomer — the New Guardsmen. This grassroots volunteer organization helps farmers and ranchers in the Negev and the Galilee who administer vast tracts of state-owned land to deal with the threat of illegal seizure of their land. Like the original Guardsmen, HaShomer HaChadash works to ensure a stronger Jewish presence and uphold the Zionist ideals on which the state of Israel was founded.

Fast forward to October 2014. Calling for a mass migration to Berlin because chocolate pudding costs less there — and yes, I’m well aware it’s a metaphor for cost of life in general — in my opinion, is throwing away the very basic values that formed our Jewish home, the cornerstone of the Jewish state and of Zionism. Living in Israel isn’t about inexpensive real estate and great bargains. It’s about giving this country everything we have, since it’s our only Jewish country. Yair Ashkenazi and the 71 other Israeli soldiers killed this past summer knew life here isn’t easy, and that it’s costly, risky and at times, frustrating, but they knew this is home, and even when home becomes crowded, less convenient and less tempting, one doesn’t leave home to find better chocolate pudding elsewhere.

Whatever chocolate they serve in Berlin, with all its recent anti-Semitism and anti -Israel sentiment, will never measure up. Ours will always be best to us, simply because it’s ours. I am not disparaging Jewish life in the diaspora in anyway — we all have our role to play. But Israelis — like the modern HaShomer HaChadash, who live up to the best of Zionist principles and ideals — know that this is home and even when singing and dancing at concerts, we will always remember to pay respect to and embrace those who paid the ultimate price for living here.

Today we celebrate Hoshana Raba, or Great Supplication, which is the seventh day of Sukkot. Hoshana Raba is known as the last of the Days of Judgment which began on Rosh Hashana, during which time one can still plea for health and happiness and to be inscribed in the book of life.

I’m hopeful that by today our Jewish homeland is inscribed for peace and prosperity, and that residents and visitors alike will value this land’s milk and honey, and yes, even its sweet, delicious chocolate pudding.