Supporting Jewish men and women who serve our country is at the heart of all we do. 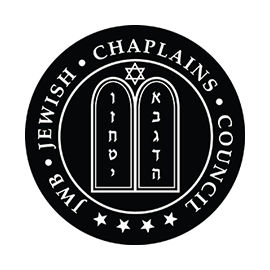 Whether lobbying Congress so that a Marine can wear his kippah (ritual head covering) in service, providing a seder for soldiers stationed at a remote base in Afghanistan, or raising awareness of Jews in the military, JWB Jewish Chaplains Council is there. Our role, since 1917, has been to safeguard the rights, fulfill the spiritual needs, combat the loneliness and isolation and honor the service of Jews in the United States armed forces. We endorse Jewish chaplains to the Department of Defense and the Department of Veterans Affairs, augmenting their resources and advocating on matters of policy.

Founded as the Jewish Welfare Board, the first national organization to represent a loose coalition of Young Men’s Hebrew Associations, our initial role was to support young men heading into service during World War I. This included the Chaplains’ Committee of the JWB, which until recently, served as the sole endors­ing body for Jewish chaplains in the military and Veterans Administration. So successful was JWB in its advocacy, that it remained an organization after the war ended, eventually focusing primarily on two areas: Jewish Community Centers and Jews serving in the military. The council includes 16 rabbis, four each from the Central Conference of American Rabbis (Reform), the Rabbinical Assembly (Conservative), and the Rabbinical Council of America (Orthodox), plus four active-duty Jewish chaplains representing the Chaplains Advisory Group (CAG). The Chaplains Council provides full support services to Jewish chap­lains, and administers ecclesiastical approval for chaplain candidates and Jewish lay leaders in the military, and is the only organization that endorses chaplains from all streams of Judaism.

Those two roles come together when JWB empowers JCCs to be community leaders on outreach and the engagement of service members and veterans. JWB helps JCCs live the ideals of creating and supporting diverse Jewish communities and building Jewish identity.

Contact Janine Acevedo for more information at 212-786-5090 or jacevedo@jcca.org.